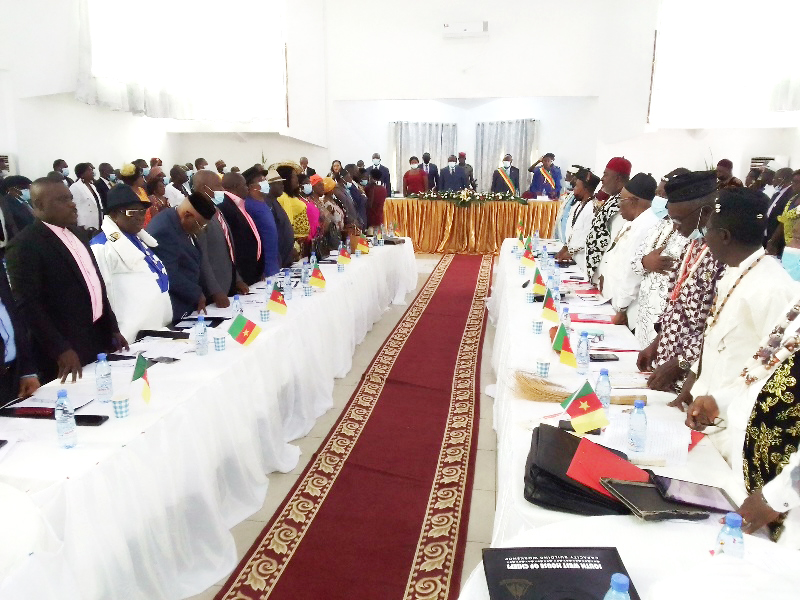 Southwest regional authorities, notably, the Governor, Bernard Okalia Bilai and the Regional Council President, Zacheus Bakoma Elango, have presented the Region’s income and expenditure accounts for 2021, remarking that insecurity stalled the effective implementation of some projects.

Governor Okalia Bilai noted that the Southwest Region was allocated FCFA 36 billion in Cameroon’s 2021 budget and, out of this money, 9.6 billion was used to execute 384 projects across the six Divisions of the Region. But due to the insecurity and other constraints, Governor Okalia Bilai said, 369 projects were effectively realised, making a percentage of 82.5.

Manyu Division had the highest project execution rate with 98.5 percent, while Meme came last, with 70.3 percent of projects allocated for the division having been completed by the end of last year.

Citing the recent killing of local authorities by Separatist fighters in Ekondo-Titi, the Governor noted that insecurity remained a challenge to the administration of the Region.

“Our Region has encountered so many difficulties since the beginning of the security crisis. This has affected the quality of livelihood of our local population. Actions of Separatist fighters have been constrained and restricted to some few areas. But some of these pocket groups which remain present in some areas prevent the holding of a number of administrative activities,” he said.

The persistent insecurity situation, he said, has hindered school attendance across the Region especially in Lebialem, Manyu and Meme Divisions. He said subdivisions like Wabane, Alou, Menji, Akwaya, Konye and Mbonge are still lagging behind in school resumption due to insecurity.

He, however, lauded the increasing percentage of secondary schools which are now operational in the Region, stating that student enrolment in secondary schools was 89.5 percent during the 2020/2021 academic year compared to 74.8 percent in the 2019/2020 school year.

The security situation in the Region has also marred activities of parastals like CDC, which employed over 20,000 people before the crisis, PAMOL and SONARA.

The CDC and PAMOL have been victims of Separatist attacks which grounded activities in both sectors. Talking of CDC, Governor Bilai said: “Salary arrears of personnel have caused many strike actions and malfunctioning in this State company. Moreover, Separatist groups have occupied some portions of their land, coupled with these added headaches to the numerous issues of land surrendering with nearby villages”.

“PAMOL Plantation Plc is faced with numerous difficulties with the resurgence of attacks, some targeted by Separatist armed groups in Ndian Division,” he said further.

This security situation has curtailed production by these companies, causing a surge in the prices of some products like palm oil across the country.

The National Oil Refinery, SONARA, on the other hand, caught fire in 2019 under suspicious circumstances which some people linked to the crisis. Almost three years later, damaged infrastructure at the refinery is yet to be rehabilitated.

During the past year, Southwest taxation services are said to have collected FCFA 10,298,979,276 which was 130 percent above the expected FCFA 7 billion. These taxes were gotten from 5,602 enterprises in the Region, said Governor Okalia Bilai.

Lauding the achievement, he remarked: “This is an eloquent testimony that the crisis often used as excuses by some Councils not to collect taxes can be debated.”

The crisis has paralysed economic activities in the Region, and income-generating activities by some municipal councils have been completely grounded.

Such is the case of Menji and Konye Councils in Lebialem and Meme Divisions respectively, which are among the worst affected municipalities in the Southwest Region.

The Southwest regional Assembly, through the Regional Council President, Zacheus Bakoma Elango, reported on the activities it has carried out during its first year of operation, 2021.

He revealed that regional body spent FCFA 891,846,917 between May 2021 and March 2022 on activities carried out within that period and on the payment of Regional Councillors and workers.

They budgeted FCFA 2.7 billion, but had only received FCFA 1 billion from the State as of March 2022. Meanwhile, it was able to raise FCFA 3.3 million as income through the sale of tender files, making its entire income received for the 2021 financial year FCFA 1,003,347,000.

In his presentation, Bakoma Elango said they successfully executed 13 out of 21 projects awarded throughout the year, marking a 61.9 percent execution rate. These 13 projects were budgeted at over 327 million.

The Regional Assembly disclosed that it looks forward to constructing its permanent building, as a four-hectare piece of land in Buea has also been carved out for the construction.