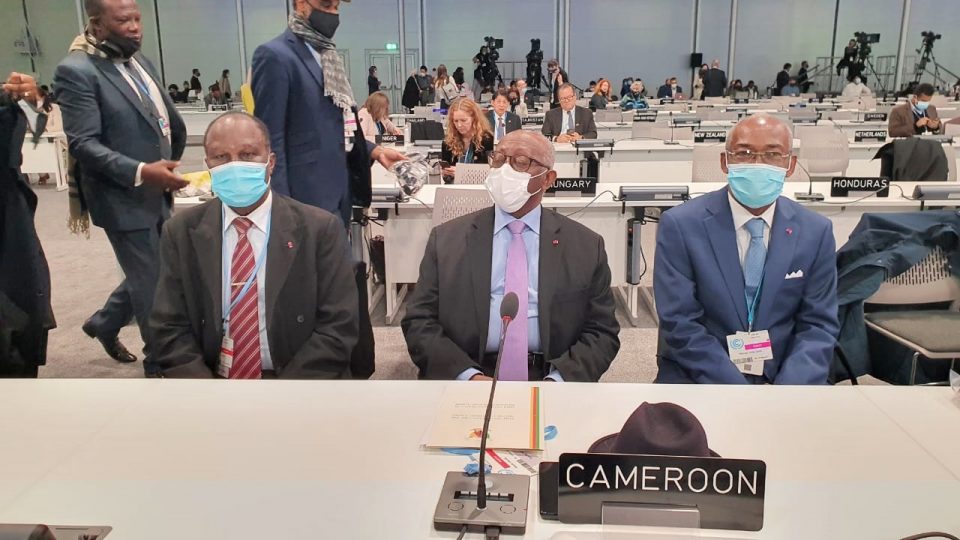 The Government of Cameroon, through the Minister of Environment, Protection of Nature and Sustainable Development, MINEPDED, Pierre Hélé, has presented the country’s biochar initiative at the 26th Conference of Parties on Climate Change, COP26, ongoing in Glasgow, Scotland.

The crucial summit and the most important on environmental issues in recent years after the Paris Agreement of 2015, brought together representatives of nearly 200 countries, governments and civil society.

The presentation of biochar and the investment plan for its deployment in Cameroon in concrete terms by the Minister, took place on November 9, 2021, during a special high-level panel at the COMIFAC stand. The event, open to partners, was also marked by a press conference that had other speakers, notably: Prof. Jean Jouzel, a Climatologist and former Vice-Chair of the Inter-Governmental Panel on Climate Change, IPCC; and Axel Reinaud, President of NETZERO.

The Minister talked about Cameroon’s commitment to embracing measures to stem the nefarious effects of climate change, including long-term carbon sequestration. He said in that light, Cameroon is one of the pioneers in the world to integrate biochar into its climate and development strategy.

He, thus, announced a strategic partnership with the NETZERO Company geared at constructing about 50 biochar production sites by 2030.

“It has a twofold objective: to significantly accelerate Cameroon’s efforts to combat climate change by removing and durably storing at least 250,000 tons of carbon dioxide per year, on the one hand, and to take advantage of the significant agricultural and energy co-benefits of biochar to improve the development of rural areas and agricultural production sites on the other hand. Cameroon, thus, becomes the first country to integrate biochar in its climate and development strategy,” Hélé maintained.

Biochar is a solid product with high carbon content, similar to charcoal powder. It is produced from agricultural residues from which carbon is extracted by pyrolysis. It is a climate solution validated by the IPCC to sequester atmospheric carbon in the soil for hundreds of years. Mixed with topsoil, biochar is also a proven way to durably improve water and nutrient retention in soils and thus improve crop yields. Finally, the biochar production process releases renewable energy in the form of gases, which can be converted to electricity. At the same time, the carbon sequestered in the soil remains stable for hundreds of years.

The first production site, constructed by NETZERO in Nkongsamba, Littoral Region of Cameroon, has just been completed. This is the first industrial-scale biochar production plant in Africa.

“The potential for replication in Cameroon is enormous, given that millions of tons of unused agricultural residues are generated every year by the agro-industrial sector. The Ministry of Environment, in partnership with the Ministry of Agriculture, will have to play a vital role in identifying future sites, facilitating relations with local stakeholders and supporting the dissemination of biochar to farmers, while NETZERO will provide the necessary operational expertise and funding,” a press release from the Communication Unit of MINEPDED states.

Attending the COP26 meeting since November 1, 2021; Cameroon, a member country of COMIFAC, had an ambitious agenda with the main articulations presented by the delegation head, the Minister of External Relations, Lejeune Mbella Mbella, who was also the personal representative of the Head of State, Paul Biya. The Minister of Forestry and Wildlife, Jules Doret Ndongo, who is current COMIFAC President, and Pierre Hélé, as well as some of their close collaborators, constituted the official delegation to COP26.

Although Cameroon and COMIFAC countries are essentially committed to protecting forests to preserve the carbon sinks they represent, these countries, which have already benefited from the announcement by a group of donors of FCFA 983 billion in funding for the preservation of these forests, used the COP26 meeting to state their specific priorities and expectations.

As Judge Dismisses Case: Detained Antoinette Kongnso’s Lawyers Say It’s Not Over Yet

Bread, A Special Delicacy In Yaounde