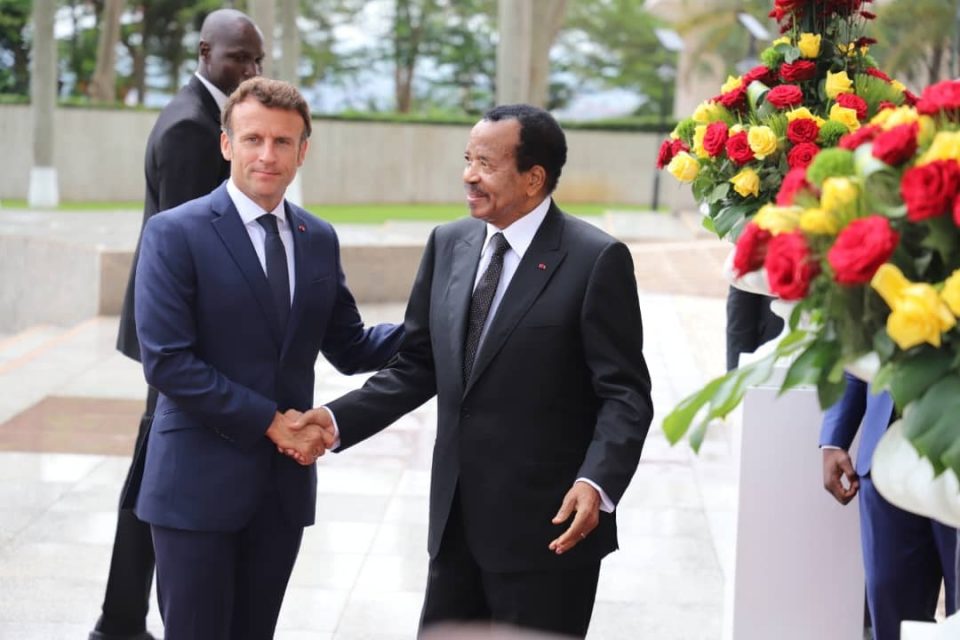 French President, Emmanuel Macron, has said it is through the politics of dialogue, reinforcement and reconciliation that durable solutions will be found to the ongoing crisis in the Northwest and Southwest Regions of Cameroon.

Macron made the statement during a press conference that followed an in-camera meeting with Cameroon’s President, Paul Biya, in Yaounde. Macron was on an official tour to Africa after his re-election as President of France.

“… I wish to renew the support of France in the procedure of decentralisation. I remain convinced as I told the President that regionalisation contributes to the serious crisis that continues to affect the country in the Northwest and Southwest Regions of Cameroon. And it’s by the politics of dialogue, reinforcement and reconciliation that durable solutions will be found,” he said.

President Macron indicated that Cameroon is France’s strategic partner in the Central African region. “…And it’s not at random that I am in Cameroon for the first step of this African tour since my reelection. Firstly, from the depth of the Franco-Cameroonian relationship with the exceptional character of friendship between our countries and also Cameroon is a strategic partner in Central Africa.”

“This strong relationship that unites Cameroon and France is translated by an exceptional corporation. Common properties have made Cameroon one of the first partners of the French agency of development. By the side of the Cameroonian Government, they have financed projects worth FCFA 2 billion Euros in the last past years,” Macron added.

The visiting French President also pointed out that it is time to diversify the corporation ties beyond infrastructure and commodity. “If we can look in the domain of agriculture, training in the numeric and cultural industries, creative, sports, that is the sense of the delegation accompanying me.”

Talking about Central Africa, Macron said: “It is a region which I wish to consecrate more time during this second mandate and next because I very much admire the Cameroonian youth that we have discussed about.”

According to Macron, the levels of excellence of young Cameroonians, added to their talents that are present, are a pride for the country and they will help to establish the true nature of pre and post-independence Cameroon. “I think it is France’s role to give them a chance to succeed.”

Concerning the Ukrainian-Russian war that is affecting the African continent, Macron said: “European economic sanctions on Russia that are now affecting Africa are intended to stop Russia’s attack of Ukraine’s sovereignty and not to punish Africans. However, France will help African countries by encouraging local investment in agriculture to increase food production.

“Food, like energy, has become Russian weapons of war. We must help the African continent to produce more itself,” he added.

While indicating that his country is still considering if French troops can be deployed to Africa as was the case in some African countries, Macron said France will support countries fighting terrorism, if the affecting countries seek for military assistant. “We work in a clear frame to the demands of a sovereign state to defend the state.”

During the visit that took place President Macron to the French Embassy and Yannick Noah’s Club, he also indicated that the archives of the French colonial rule in Cameroon would be open in full, so as to shed light on the painful moments.

According to Macron, historians from both countries need to work together on investigating the past and establish responsibilities. Tens of thousands of UPC party members, including its leader, Ruben Um Nyobe, were killed by the French army during Cameroon’s struggle for independence.

In his preliminary remarks, President Biya saluted Macron’s visit pointing out that it permitted them to agree and revive as well as diversify their efforts in the domains of agriculture, industry, infrastructure, trainings and local development.

“President Macron and I are of the opinion that everything must be done to achieve a rapid cessation of hostilities. For this to happen, the logic of confrontation must give way to that of conciliation and dialogue,” he said.

Besides thanking France for the multifaceted support, President Biya said: “Our exchanges of today have permitted us as Presidents to do a horizon tour of the national in our both countries and also the international situation.”

Answering to media preoccupation concerning his leadership at the helm of the country, Biya said: “…As you know, Cameroon is a country that is ruled in conformity to her constitution. According to this constitution a mandate has the duration of seven years. Hence, try to subtract four from seven and you know how much more time I have to rule the country. At the end of this mandate, you will be informed to know if I will stay here or I will go to the village.”

“Evidently, Cameroon has started witnessing the effects of the war. There is this galloping inflation, transportation difficulties and people are worried. We don’t know what tomorrow holds. Cameroon will do what is in her power to watch the end of this war and the negotiation of peace,” he said.

During the press conference, no question was asked by Anglophone journalists as they were relegated to the background. Macron will visit Benin and Guinea Bissau before returning to France.

Activities Before & After The Visit

Prior to President Macron’s visit, there were many talks about the discussions that will flow between President Biya and Macron. Some opined that France was unhappy with the accord that Cameroon signed with Russia. To that effect, France was coming to secure her position.

Other observers opined that France was coming to solidify their corporation ties as well as to have a say in the ongoing crisis in the Northwest and Southwest Regions of the country.

Cameroonians were very surprised that some Ministries declared July 26 a public holiday in Cameroon due to the Macron visit. According to some Cameroonians whom The Post met in the different Ministries, the only information that filtered out was that nobody was present to attain to them.

Some were very categorical that they had been informed that there wasn’t going to be any work, given that everybody will be involved in the visit of the President of France. Those who had braved the odds to get to these Ministries were seen stranded.

“I am completely disappointed that today is public day in Cameroon. How can a visit of a President give workers the reason of saying that they are not working today? This is not fair. Things have to go on,” a teacher said.

The visit of Macron, just as it has been when other personalities visit Cameroon, caused some parts of the national capital to be rehabilitated. Major streets where the august guest was supposed to pass were renovated with potholes filled overnight.

Major streets were painted and swept over and over while street lights that had been abandoned for several months saw the light of day. Even though this sounded good to some city dwellers, others decried the situation asking whether the city can only receive a fresh touch when an important personality is coming to the country.

“I am happy that some major innovations were done in town, but must we only do this when a visitor is coming to the country? When the President is going, things are done overnight to give the impression that all is good but, actually, nothing is going well. I am sure that President Macron will be going back saying that Yaounde is a clean city, but I tell you that is not the case,” a city dweller said.