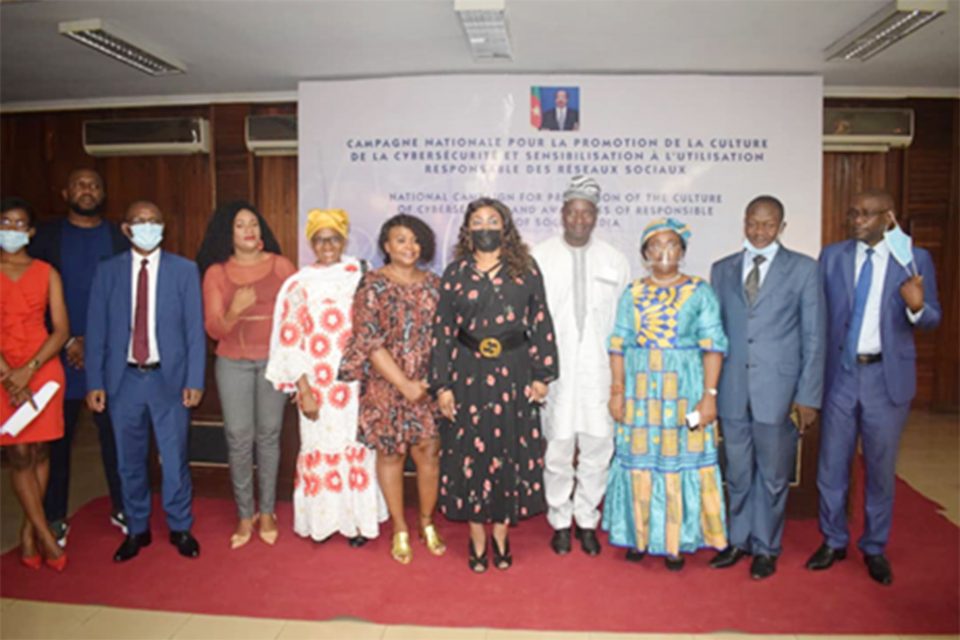 Some goodwill ambassadors of the national campaign to promote the culture of cybersecurity and raise awareness on the responsible use of social media, alongside two other musicians, have released the official song against cyber criminality.

The musical piece, titled “Stop Cyber Crime”, was composed and realised by renowned Cameroonian artists comprised of Ateh Bazore and SanzyViany, both goodwill ambassadors, alongside Annie Anzoue and Isnebo. The song is made up of five stanzas and a chorus and was presented on October 19, at the ancillary building the Ministry of Posts and Telecommunication in Yaounde.

According to Minister Minette Libom Li Likeng, the song is a rallying one that will become an important marker of the development of the campaign against cybercrimes and the misuse of social media.

It aims at convincing the public to join the course by revealing the realities, denouncing the evils, and conveying a message of hope. This is why the song touches the sensitivity of those who listen to it and brings them to consciousness.

“We believe that this artistic cookie will allow all Cameroonians, even Africa who will listen to this song to rally, to fight cybercrime because we are obliged to navigate in the cyberspace and we cannot get out of it unless the cyberspace is secured. You see through the song, despite the beautiful melody, there are messages,” she emphasised.

Talking as the brain behind the initiative, Ateh Bazore revealed that the inspiration of the song stems from the last campaign in Bertoua where he felt the urge to add another style in the dissemination of the message, while hoping it will strengthen the pillar of the fight.

To him, the internet is a wonderful tool that can permit people to develop and not use social. Media to denigrate their nation because all that is posted on the internet is not erased as highlighted in the song.

Thus, between educational talks, poster campaigns, training sessions and press conferences, music is also a means for the Ministry of Posts and Telecommunications, to bar the voice of cyber delinquency, and to continue raising awareness foe the responsible use of social networks in Cameroon.

Meanwhile, SanzyViany stated that, “The message that our song conveys is to be very careful about what you post on social networks, to behave responsibly on social networks, develop a cyber security behaviour daily, no matter what social level you belong to.

“Asked of the peculiarity of and why they chose to address the public through a song, SanzyViany said, “this song also conveys a message of protection of our data but also a message of encouragement to all members of the civil society to use the IT tool to do things better than hanging out or being idle on social networks like doing research, working, getting a new job or developing our capital in contribution to everything that can make society evolve.”

“Music is an art that conveys emotions, it is an art that speaks even to the subconscious. So a message that children can repeat, that old people can listen to, that everyone can repeat over and over again, makes the message stick. Music is a bit like cinema, in image and audio, it’s easier to receive information than to sit and receive an hour-long speech,” she stressed.