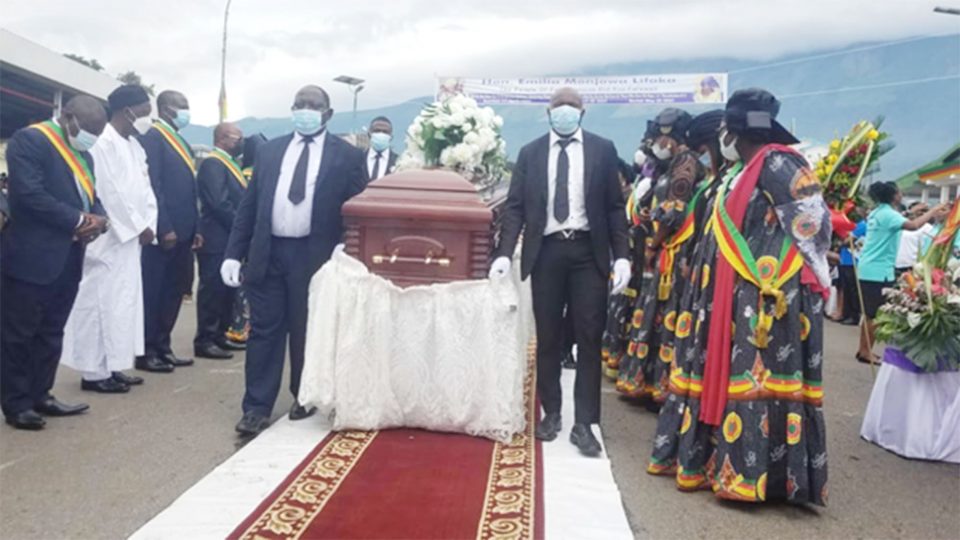 The remains of Buea Rural Member of Parliament, Hon Emilia Monjowa Lifaka, were laid to rest after a funeral ceremony in Buea, May 22, presided at by the Speaker of Cameroon’s National Assembly, represented by Deputy Speaker, Hon Hilarione Etong.

Described in several eulogies as brave, tenacious, patriotic and serviceable, the late Hon Monjowa Lifaka, who died on April 20, was decorated with a Commander of Order of Valour Medal which honours her over 30 years of service to the Government.

In a eulogy at the funeral ceremony held at Buea Independence Square, the Lifaka family head, Jacob Matike, who is also late Lifaka’s elder brother, urged mourners to be as tenacious and brave as his late sister, adding that the late MP’s detractors and adversaries are left to their consciences.

“We have been left homeless, but there are homeless shelters willing to open their doors to accommodate us. We have to strive and mount the same tenacity she used to squash her detractors and adversaries in the likes of … I’m not going to call names, but you know yourselves. Let your conscience be your judge. In a difficult time like this, we must take the example of bravery as we try to move forward without someone we love so much.”

The Deputy Speaker of the National Assembly was considered one of Fako’s most vibrant female politicians, and her brave and ambitious spirit placed her at odds with some of the Fako’s top ranking politicians.

During her life time, she spent some FCFA 21.5 million in helping the underprivileged access education, after signing a Memorandum of Understanding, MoU, with Cameroon Opportunities and Industrialisation Centre, COIC, Buea in November 2014, to provide training to youths and the underprivileged. Last year, she also created the Lifaka Foundation to help needy persons in Fako.

Lifaka’s funeral was marked by several eulogies that came after a mass celebrated by Mgr Michael Bibi, Bishop of the Buea Diocese and Mgr Andrew Nkea, Archbishop of Bamenda.

In his sermon, Archbishop Nkea hailed the fallen Lifaka as a “politician with a difference” who cared dearly for her people and had an “unconditional and unflinching loyalty” to the ruling CPDM, where she belonged.

The prelate damned politicians who are usually absent from their constituencies and only come home for ceremonies and elections.

He slammed some politicians (without calling names) for hypocritically calling for peace in public, while financing and supporting armed groups in the Anglophone Regions.

Hon Emilia Monjowa Lifaka was born on April 11, 1959, in Bojongo, Buea. She attended the Cameroon Baptist Convention Primary School Great Soppo Buea, and then moved to the Cameroon College of Commerce, CCC Kumba, from 1973-1978 when she obtained the GCE Ordinary Level. She later moved to St Paul’s College Bojongo where she got her Advance Levels in 1981.

She moved to the University of Maryland, East Shore USA, in 1988 after which she returned to the country and was recruited to work at the Institute of Agricultural Research for Development, IRAD Ekona in 1989, and later served as the Director of Intensive Vocational Training Centre, IVTC, Buea from 1997-2002.

In 2007, she was elected Vice President of the CPDM Parliamentary Group in the National Assembly and, in 2009, she became Deputy Speaker and was subsequently re-elected as such until her death.

Still in 2007, she became a member of the Commonwealth Parliamentary Association, CPA, where she held several positions between 2012 and 2014. In 2017, she was elected as the first African to head the CPA’s Executive Committee since the creation of the association in 1911.

While alive, she received several national decorations among them Knight of the Cameroon National Order of Merit; Officer of the Cameroon National Order of Merit; and Knight of the National Order of Valour.
“For others, she was a mother, while for us, the elite of the Southwest Region… she was more than just a woman or mother. She was, in fact, a role model for young girls in particular and mentor to the youth in general. Hon Lifaka was an outstanding woman, member of the elite class in our Region and the entire nation… She stood out as a tireless promoter and defender of the values of our dear nation…,” said Hon Johana Agborntui, who spoke on behalf of Southwest elite.

“Your grandchildren will know of their grandmother who, against all odds, built a legacy which should be protected. The granddaughter of a catechist, who grew up at the foot of Mount Cameroon with a dream, coupled with unending hardwork, discipline and determination, to be the best she could for her family, community and country,” said Lifaka’s second son, Kenneth Edube.

As leader of the Commonwealth Parliamentary Association, Lifaka’s funeral eulogies also came from Commonwealth Secretary General, Patricia Scotland, who was represented at the occasion by Anne Oben, the Director of Commonwealth at the Ministry of External Relations.

“The news of the sudden death of our beloved sister, friend and mother, Emilie (as we usually called her), filled us with shock,” said SONARA board member, Doh Belta, on behalf of  Circle of Friends of Cameroon, CERAC, led by First Lady, Chantal Biya, where she became a member in 2002.

May 20, 1972 Albatross And Abolition Of Federalism