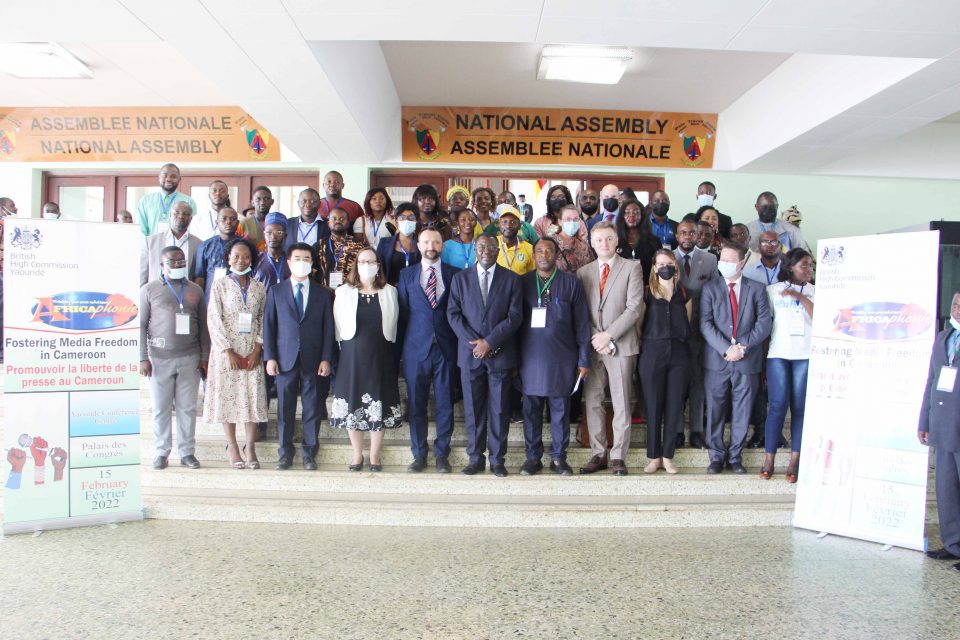 Journalists and other stakeholders in a group photo

Over 70 journalists and other stakeholders in Yaounde have expressed the need for the enactment of an information act and the amendment of the 1990 law on mass Communication, in order to foster press freedom in Cameroon.

This is one of the resolutions taken during a one-day multi-stakeholder conference that took place in Yaounde on February 15. The Foreign Commonwealth and Development Office financed the conference that was organised by the civil society organization, Africaphonie Cameroon. The conference was held under the theme, “Fostering Media Freedom in Cameroon.”

The British High Commissioner to Cameroon, H.E. Dr Christian Dennys-McClure, chaired the opening ceremony, accompanied by the Chair of the Cameroon National Communication Council, Joseph Chebongkeng Kalabubse, and other dignitaries.

Apart from the information act, journalists also indicated that there is an absolute need to amend law 1990 No. 90-52 of 19 December 1990 relating to freedom of mass communication.

Speaking during the opening ceremony, H.E. Dr Dennys-McClure saluted the initiative and indicated that the United Kingdom alongside 58 countries supports media freedom, and through this particular event; “we are encouraging conversation about the commitment made and access to freedom of the press.”

Harping the topic, “Exploring the gaps in the 1990 media law and proposing reforms towards greater Press Freedom”, Prof. Kingsley Ngange, JMC HOD, University of Buea said, “This is a good time to start the conversation after over thirty years of the freedom laws of expression in Cameroon. This discussion is aimed at looking at aspects of the law that may be problematic or need to be amended in order for journalists in Cameroon to perform their job well.”

“That is how we should as journalists also solicit for the reorganisation of the profession for better performance that is needed so that, we can get the well-deserved or desired results that we advocate for in the practice of our profession and the realisation of democratic goals in Cameroon,” he added.

Chebongkeng Kalabubse on his part said, given the challenges that the traditional media has contrary to citizen journalism, there is a big battle. He hoped that the project will help traditional media organs to understand that they have to meet the people where they are going to, that is on social media.

Presentations from Christophe Bobokiono, Publisher of Kalara Newspaper, Comfort Musa, and Jesse Konang also indicated that for journalists to better perform their work, they need access to information.

Citing sections 13, 14, 15, and 16 of the media law compelling publishers to submit copies of their newspapers to administrative authorities or face a financial penalty,  journalists said, the media law needs to be revisited especially at this time that the social media is present.

Journalists also pointed out that, given that transparency and accountability in administration is a prerequisite of participatory democracy, the free flow of information is essential for the health of a democratic society.

The multi-stakeholders conference that was moderated by Yerima Kini Nsom of The Post, marks a decisive twist in the Media Freedom campaign that will help to develop skills and knowledge of journalists. In turn, they would engage the government in the bid to amend laws that impede the exercise of their profession. The campaign also equipped participants with skills in digital journalism. Another multi-stakeholders conference is expected to take place in Buea very soon.

Press Freedom remains a serious debate reason for selective governmental information hoarding, the contentious role of the media on professionalism, hate speech and others.