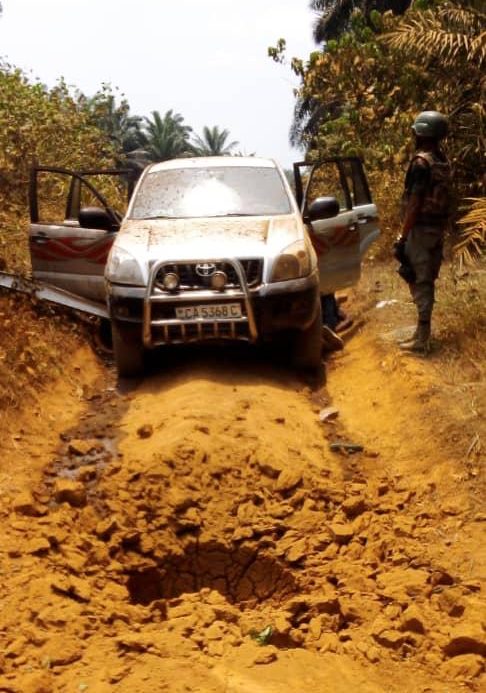 The Divisional Officer, DO, of Ekondo-Titi in Ndian Division, in Cameroon’s Southwest Region, whose name The Post got as Timothee Aboloa, has died alongside Ekondo-Titi Mayor, Kenneth Nanji.

Information gathered suggests that they died following a bomb attack. Sources say the incident occurred around 11.30am on Wednesday, March 2, at Bekora, about one kilometre away from the Ekondo-Titi town centre.

The Post got images believed to have emanated from the scene showing ravaged bodies as a result of the bomb attack. It is still unverified whether it was a landmine or an improvised explosive device, IED. However, the car in which they were in has signs of gunshots making some people believe that the perpetrators were at the scene.

Other sources indicated that they were five people in the car which bore the number plate CA 5368 C. It is alleged that none of the occupants survived. The DO, Timothé Aboloa; Mayor, Kenneth Nanji; DO’s Driver, Stanley Meh; CPDM Sub-Section President, William Ebeku and Warrant Officer, Akono; all died.

At the press time, we could not tell where they were heading to and for what reason; but other reports have it that the team was out on a socio-economic tour.

No one has claimed responsibility for the attack so far, but fingers are pointing towards Separatist fighters operating in Ndian Division under self-styled ‘General Ten Kobo’.

The killing of these officials is coming months after Separatist fighters abducted some six Ndian Divisional Delegates on June 15, 2021, and one died in their camp. Up to this moment, the rest are yet to be released. It is not known whether they are still alive.

Still in Ndian, late in 2021, a teacher and four students of Government Bilingual High School Ekond-Tiko were killed by suspected Separatists, though the Separatist commander operating in the area denied claims that he and separatist fighters carried out the act.