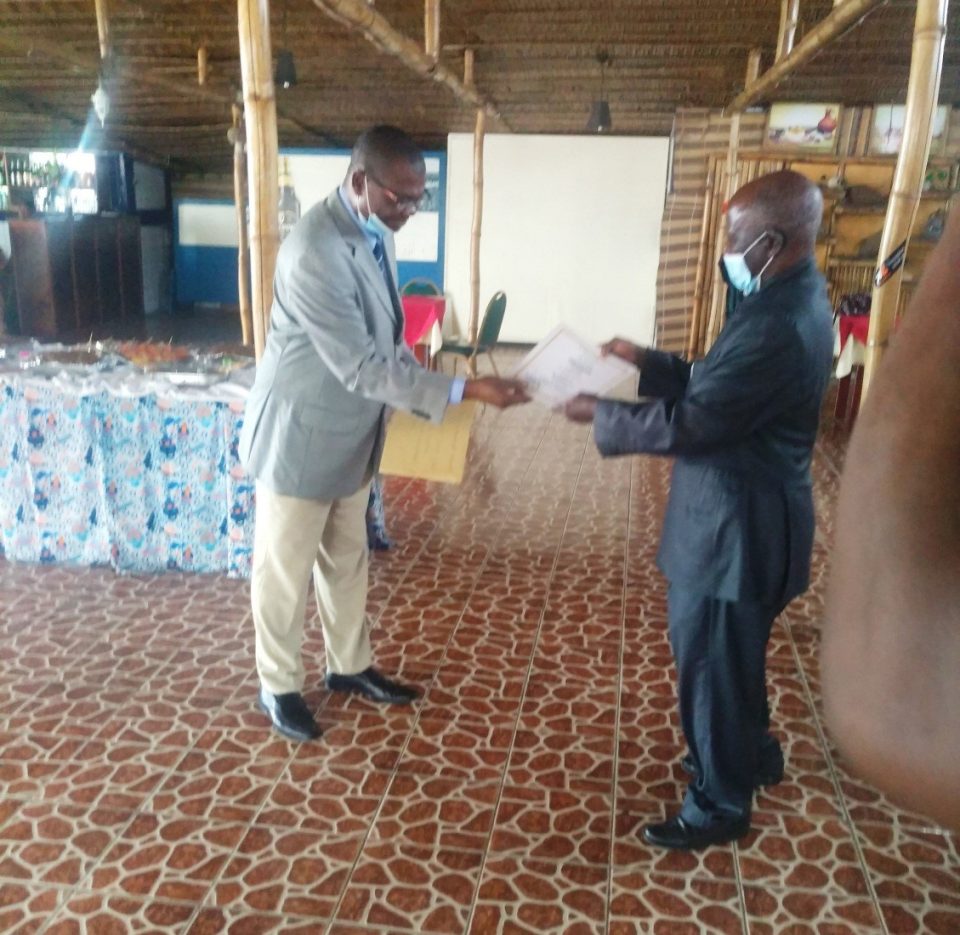 Chris Ambe hands over the award to Dr. Ngongi

Dr Amos Namanga Ngongi, a senior citizen and former UN Senior official, on May 5, in Buea, received an “Achievers and Builders Award” from The Horizon Newspaper, plus a token, for his sterling service to society.

The ceremony was termed by the representative of The Horizon in Buea, Chris Ambe, as a prolongation of the 15th edition of The Horizon Newspaper Achievers and Builders Awards where 12 people were recognised this year, among them Dr Amos Namanga Ngongi. Ambe said the other laureates received their awards in Yaounde earlier on and the Publisher, Gerard Ndikum, felt that, since Dr Ngongi could not make it to Yaounde, his award should be handed to him in Buea, plus a token of FCFA 50,000 in cash.

He said Dr Ngongi is a CPDM militant with a difference, because he is not the type that says things are good when they are bad.

“Dr Ngongi will speak his truth in a funny, subtle way,” Ambe added.

Ambe stated that, unlike with other papers that request money before giving awards, The Horizon rather gave to the awardees a financial package.

In a word of acknowledgement, Dr Ngongi said he could not make it to Yaounde at the general ceremony because there were some issues in his care, given the security crisis that has been compounded by the COVID-19 health crisis.

He appealed mostly to young people to build a better future for themselves.

“If you look well, I have invited mostly the young people whose future we should build. I invited them to pass a message of building a better future,” Dr. Ngongi said, imploring young people to invest their efforts in their future – a better future.

Thanking The Horizon for recognising him, he thanked the other newspapers which, he said, have made the Anglophone Problem now known to the world.

Dr Namanga Ngongi’s brother, Senior Barrister Ikome Ngongi, in a vote of thanks to the award givers, said: “We live in a community where people do not give people the recognition they deserve. I appreciate this award to my brother and I will always support him in his efforts.”

Turning to the young people, Barrister Ngongi asserted: “As my brother said, young people are not engaged to bring change – they want fast money. You have to first work hard, render services and then you are recognised by your society, and then they will come to you for services. Today, I have work for more than 50 lawyers. I want especially young lawyers to come to my chambers. Serve and you will make a name and money will follow you. I don’t go running around for money, money follows me.”

Dr Amos Namanga Ngongi, an indigene of Buea, was born in 1945.  He holds a PhD in Agronomy from Cornell in 1976. A devout Catholic who is married for more than 50 years, he is also a member of the ruling CPDM political party.

He began his career as an agricultural extension officer for the Ministry of Agriculture, Cameroon, helping farmers to improve yields and to diversify and market their crops.

In 1980, Ngongi worked at Cameroon Embassy in Rome and then joined the World Food Programme, WFP in 1984. He became WFP Deputy Executive Director in 1994, a position he held until his appointment in 2001 as UN Undersecretary-General, Special Representative and Head of the UN Peacekeeping Mission in the Democratic Republic of Congo until his retirement in 2003. He served the United Nations for 19 years in various capacities.

He is a former Member of the United Nations’ Performance Management Board. He was Pioneer President, Alliance for a Green Revolution In Africa, AGRA, with headquarters in Kenya, for five years.

He is a former member of the Cameroon National Anti-Corruption Commission: He was the major financier, Wonyalyonga Development Association multi-purpose hall (Buea Town) estimated to cost 100 million FCFA upon completion; he made material donation to Muea Health Centre (2010); electrified Bonakanda Health Centre; organised, for years, the Dr Namanga Ngongi’s Inter-Quarter Football Tournament to keep residents, especially youth and students, usefully occupied during long vacations; he has assisted underprivileged groups; he is a resourceful Councillor, Buea Council; has published many informed articles in different national newspapers and magazines on the current Anglophone Crisis, advocating for mediated inclusive dialogue as a way out of the imbroglio.

May 20, 1972 Albatross And Abolition Of Federalism

Post-Colonial Slave Trade Initiatives: Construction Of Afro-Descendant House May Be Beginning Of Reparations