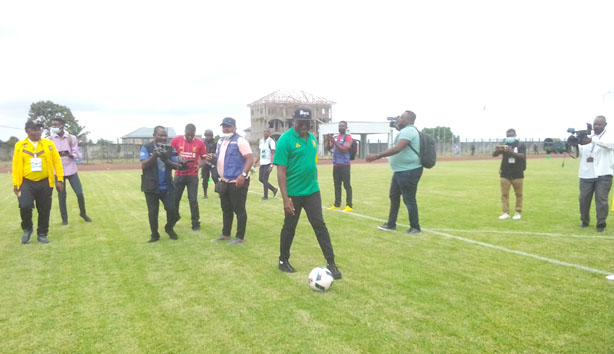 There are lots of controversies surrounding what was officially said to be a fact-finding mission to the sites that will host the upcoming African Nations Cup, AFCON, billed to run from January 9 to February 6, 2022, in Cameroon.

The mission of the delegation that was led by the Secretary-General at the Presidency, Ferdinand Ngoh Ngoh, ran from October 16 – 23, 2021. He visited sites in Douala, Bafoussam, Limbe/Buea, Garoua and finally the nation’s capital, Yaounde. The delegation visited stadia, hospitals and hotels that have been designated for use during the upcoming AFCON.

The mission was reportedly ordered by President Paul Biya, and Ngoh Ngoh was presented as the President’s envoy.

Besides being a fact-finding mission, a communiqué that was issued by the Presidency of the Republic and read over CRTV before the tour kicked off, said that the Ngoh Ngoh-led delegation also had a mission to sell Cameroon’s image to the international community as a country that is not only prepared to host AFCON, but that it is also a country that can host other international football competitions like the Junior World Cup. This was a hint by the Government that, though Cameroon is still to host AFCON, the Government is already looking beyond that to the possibility of hosting the Junior World Cup.

Consultants from foreign media included Philippe Doucet and Patrick Mboma, both consultants at Canal+ in France. Though Paris-based Patrick Mboma is a former player of the Cameroon national football team, he was presented in the communiqué as having been invited in his capacity as a consultant at Canal+.

The lone foreign former football star that was invited by Ngoh Ngoh, was El Hadj Diouf from Senegal.

Members of the delegation were said to have been designated by President Biya, but there is no doubt that, in reality, it was rather the all-powerful Secretary-General at the Presidency, Ferdinand Ngoh Ngoh, who made the decisions.

Looking at the list of foreign personalities that the Secretary-General at the Presidency invited, it was glaring that the image that  Ngoh Ngoh presented to the international community was that Cameroon is a Francophone country and that AFCON is a Francophone affair.

The two consultants that were invited from abroad were Philippe Doucet (a French), and Patrick Mboma (a Franco-Cameroonian), both from a French media channel, Canal+, in France. No foreign English-speaking consultant was invited. Yet there are, for example, many renowned international English sports consultants at Super Sports in South Africa.

The senior journalist and consultant, Jean Lambert Nang, cried out that Cameroonian authorities have a mentality that makes them think that, for something in the country to be approved as good by the international community, a French man must first say that it is good.

However, while many people agreed with Nang’s bashing that neo-colonialism still exist in Cameroon even after over 60 years of so-called independence of the country, his attack on the personality of the French journalist, Philippe Doucet, was seen by many as unfair because he didn’t invite himself to Cameroon.

Also, the only foreign former football star that the Secretary-General at the Presidency invited for the tour, is El Hadj Diouf, from Senegal, a French-speaking country. Even though there are many former international football stars in neighbouring Nigeria and other English-speaking countries like Ghana, but none was invited.

Yaounde-based BBC correspondent, Randy Joe Sa’ah, was, for example, never contacted by the Presidency for the tour, neither was any of his colleagues based in another country invited.

This issue also raised questions about one of the missions of the Ngoh Ngoh led the delegation, which was said to be to sell Cameroon’s image to the world as a country ready to host AFCON, and also as a country with the capacity to host other international football jamborees like the Junior World Cup.  The composition of the  Ngoh Ngoh delegation, with a  mission to sell Cameroon’s image to the world, reduced the world to only Francophone countries, whereas English is unquestionably the most spoken language in the world. There are quite several English-speaking countries like Nigeria and Ghana that will be participating in the upcoming AFCON.

Another major issue that sparked controversy about the fact-finding mission of the  Ngoh Ngoh delegation, was the absence of almost all key ministries directly involved in the preparation for Cameroon’s hosting of AFCON. Among the key ministries, only the Minister of Sports and Physical Education, Prof Narcise Mouelle Kombi, was present. It was the only ministry designated to be part of the exercise. Normally, each of the technical ministries was supposed to be represented in the delegation by its minister and one or two close collaborators like inspectors general or technical advisers, who are technical experts. Even the Ministry of Public Health was not in the Ngoh Ngoh delegation, that visited hospitals designated by Government to be involved in AFCON.

Ridiculously enough, sports consultants and former football players were the ones taken to hospitals to do the fact-finding of the level of preparedness. Many health personnel expressed the view that the Cameroon Medical Council would have been part of the Ngoh Ngoh delegation, if the Government wanted to know the truth about the level of preparedness of the designated hospitals.

Also, one of the Ngoh Ngoh delegation’s missions was to assess the readiness of hotels designated to host teams and officials during AFCON. Yet, the technical ministry, which is the Ministry of Tourism and Leisure headed by Bello Bouba Maigari, was not part of the delegation. It is the ministry that can explain why, for example, Hotel A has been graded as a 3-Star Hotel, while Hotel B which, from a layman’s view, looks more beautiful, has been graded as a 2-Star Hotel. But like health experts, tourism stakeholders were not invited.

Other key ministries involved in Cameroon’s preparations for AFCON, but which were left out, were the Ministry of Urban Development and Housing, as well as the Ministry of Public Works.

Questions About Importance Of The Tour

Many questions have been raised about the importance of Ngoh Ngoh’s tour, which reportedly swallowed hundreds of millions from State coffers.

The FDC Party led by Denis Atangana, for example, issued a communiqué questioning the importance of the tour.

There were lots of criticisms of the tour on social media as well.  An online publication, Afrique54.net, for example, dismissed the tour as wastage of taxpayer’s money, for Ngoh Ngoh to organise a public show to project himself.

It should be noted that a plane was hired for the tour, and members of the delegation slept in top-class hotels in the different towns. The invited sports consultants and former footballers also reportedly received heavy envelopes as ‘per-diems’.