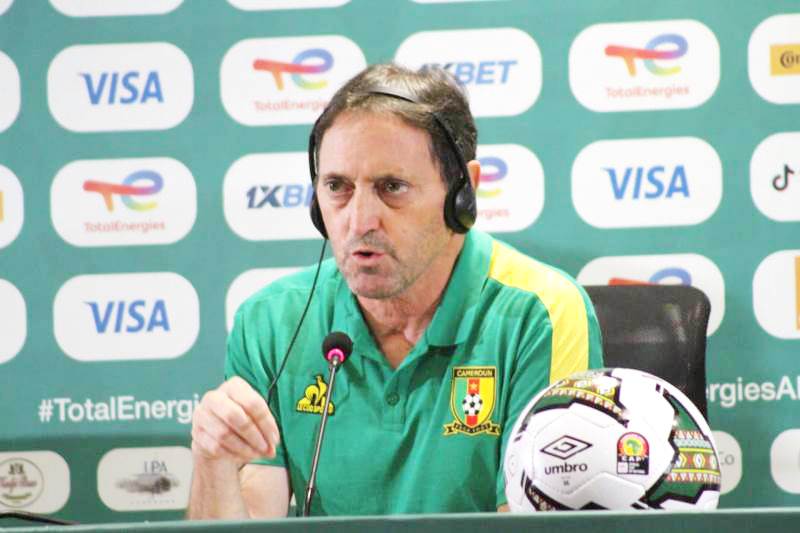 Cameroonians along the streets of Yaounde have hailed the outgoing coach of the Indomitable Lions, Antonio Conceição, for great performance while at the head of the technical team.

Speaking after being replaced by Regobert Song Bahanag, city dwellers said Conceição came like a stray shepard into the Lions den but at the end of the day, he has become one of the best coaches that the team has had in recent times.

George Mengi said: “For his time with the Lions, he has recorded only two defeats. we are proud of him,”

Simon Angel holds: “I think I am happy and want to say thank you to Coach Conceição. Even though we underrated him saying he had no qualifications to coach the Lions, he proved that with noting, he can make things right. It is true we wanted more from him but, to me, he did more than expected.”

“We need to be realistic and read in between the lines before taking decisions. We can keep on changing coaches, putting the team under the so called construction and expecting to win. That is not done elsewehere. I hope the authorities have taken a good decision. If it’s a compensation or a moment to say I am sorry for what I did, we should think twice because we can keep toiling with what is making Cameroonians happy,” James Lollah said.

Some of the Yaounde inhabitants who spoke off the record pointed out that Conceição’s sacking makes no sense because his output has been great. According to them, the issue of bringing in a coach was necessary, but not now that the teams looks forward to a crucial match against Algeria.

“Coach Conceição has been producing results and that is what we expected. Whether, you are from the North, South, West or East, what Cameroonians want is results and he did his best to prove it. So, his sacking to me is baseless. Notwithstanding, we will support Song because he has been a great player in and out of the field. He can do better if he is given the support,” Janet said.

Abdoulaziz  wonders whether Cameroon thought before changing the coach: “We always do not think before we react. What is Antonio Conceição’s crime now? Is it because he lost the game in the semi-finals? I think, if that is the reason, then, we have no idea of what we are doing. The only thing we could have done was to let him take the team with that spirit to Qatar for the World Cup and even to Ivory Coast for the 2023 Africa Cup of Nations before his contract is terminated.

On the sideline of the appointment of Rigobert Song Bahanag, some fans of the Lions praised the move to see a national at the helm of the Lions but decried the fact that the timing is bad.

However, they maintained that, to prove his worth, the back-to-back confrontation against Algeria in the qualifiers of the World Cup should be a moment for Song to give Cameroonians confidence.

Before being sacked, Antonio Conceição’s 29 months with the Lions produced 14 victories, two defeats and seven draws.

Song, who is taking over from him was the head coach of the Cameroon U-23 National team.

Cameroonians In Shock After Gov’t Urged Russia, Ukraine To Dialogue

Egypt Vs Sudan, A Crucial Derby For Both Teams