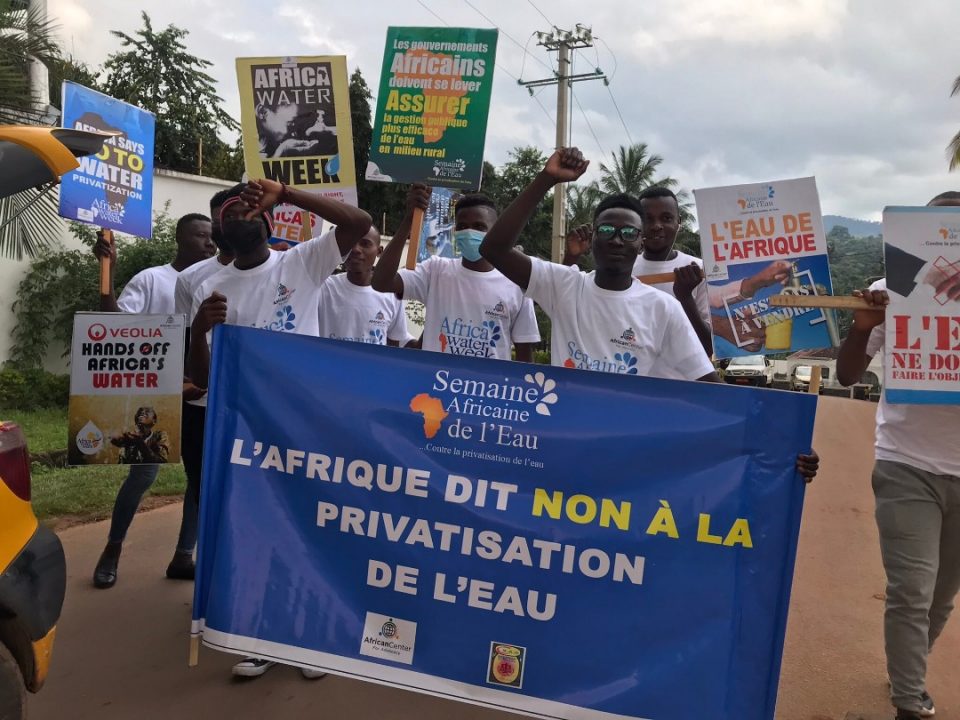 The conditions that prompted Cameroon to privatise the public water service in 2008 are once again multiplying on the ground. Between untimely water cuts, deterioration of installations and bad management practices, the public company (Camwater) which produces and distributes drinking water, is struggling to provide the precious liquid in quantity and quality to an ever-growing population. Fearing a return to another privatisation of the public water service in Cameroon, the African Centre for Advocacy (ACA) calls on the government of Cameroon to take responsibility.

In Cameroon, public control of the water service is once again in jeopardy and activists are worried that history might repeat itself.

“The Cameroonian government must not repeat the mistake of 2008 when under the influence of the World Bank, it privatized the water sector,” says Younoussa Abbosouka, an advocacy officer with the African Centre for Advocacy (ACA).

Back then, privatization was supposed to deliver improved infrastructure and lower prices — but neither materialized. Though the water was renationalized in 2018, numerous shortcomings continue to hamper the provision of clean water to the population. “We suffer badly from water shortages. Now it’s at midnight or one o’clock that we get up to check if water is flowing from the tap, and most of the time nothing flows even at that time. On rare occasions when it does, you see coloured water coming out of the tap. We have no other choice than to fetch water at the natural water source, which is down the quarter.” Says Cedric Nouta, a Yaounde city dweller.

In a report published on 18 August 2022, Cameroon Water Utilities (Camwater), the public concessionaire of drinking water (production and commercialization) in Cameroon, confessed its role in the drinking water crisis that the city of Yaounde, the country’s capital, has been experiencing for several months. According to the public company, the episodic shortages observed in the capital are mainly linked to the numerous malfunctions of the Akomnyada water collection and treatment station, located 35 km east of the city.

“Today, the water problems we have in Cameroon are mainly related to technical problems at the various pumping stations. The state is currently solving these problems and everything will be back to normal by September 30, 2022.” explains Joseph Marie Bienvenue Eyafa, Camwater Regional Director of Yaounde

“It is out of consideration to go back to the privatization scheme of CAMWATER, this will demonstrate that Camwater is unable to ensure the management and distribution of water to Cameroonian citizens. No, Camwater is not superseded because Camwater is the state. We went through 10 years of privatization and it didn’t work. We wouldn’t have these problems today if water management had not been privatized.” Eyafa said.

In 2009, the government invested nearly 4 billion CFA francs, or just over 6 million dollars, to rehabilitate and extend this infrastructure. “But since the work was completed in 2017, this station has never produced the expected volume (300,000 m3 per day). Its production oscillates between 120,000 and 150,000 m3 per day. However, the demography is galloping and the water demand has become very alarming with the multiplication of new districts,” says the Camwater report. According to official figures, the demand for drinking water in Yaoundé and Mbalmayo, two towns supplied by the Akomnyada catchment station, is currently around 300,000 m3 per day.

Managerial Failures And The Uncivil Behaviour Of The Population

Technical failures such as those recorded at the Akomnyada water station do not in themselves justify the drinking water crisis in Cameroon. On the 27 July 2022, the Central Regional Delegation of Camwater announced that it had been the victim of the massive theft of water meters in the town of Mbalmoyo. According to the company, this phenomenon is the result of ill-intentioned individuals who sell their booty to weed cultivators.

Internal management problems at Camwater are also affecting the supply of drinking water. Earlier this year, in an open letter addressed to the Head of State, the National Union of Drinking Water Employees (Sneep) denounced the “chaotic management” of the public water service, marked by, among other things, “a massive mafia, peddling, lies, mismanagement, backbiting, swindling, cronyism, corruption and embezzlement of public funds”.

Sneep initially threatened and then postponed a strike after a crisis meeting held on 9 February 2022 in Douala (Cameroon’s economic capital) with Minister of Water and Energy Gaston Eloundou Essomba, who committed to obtaining the necessary resources to finance the functioning of Camwater.

The ACA Takes Up The Cause

Faced with the state’s “inability” to effectively provide public water service, Abbosouka and the ACA have increased lobbying, media advocacy as well as labour engagements to push for reduced taxes for any household that consumes less than 20 cubic meters of water per month. ACA has enjoined the national water distribution company, Camwater to establish water pricing by categorizing the price per cubic meter of water by the type of customer. This greatly increased the number of low-income households connected to the water system.

“The African Center for Advocacy is closely monitoring privatization threats in Cameroon and other African countries. We believe that the fight against privatization, austerity, neoliberalism and corruption is intimately linked with the fight for the human right to water. This fight necessitates at national, regional and international level.’’  Explains Younoussa Abbosouka, ACA Program Officer.

Thus, in 2020, the not-for-profit organization pressed the government to invest 27.3 billion (close to 4.7 million dollars) on a rehabilitation project aimed at extending and increasing water supply capacity in other cities of the country like Edea and Bertoua by 56% and 88% respectively.

According to Abbosouka, privatizing the sector would lead to various disasters, such as tariff increases, lack of public accountability and transparency, higher operating costs, worse customer service and job losses. Others agree.

“Water privatisation enriches some government officials and multinationals and at the same time contributes to the spread of poverty among the majority of the population,” says Chief Ewoukem Godson, president of the National Autonomous Union of Energy, Water and Mining Workers of Cameroon (Synateec).

Renationalisation Of The Water Service In 2018, The Fight Of The ACA

In 2008, when the Cameroonian government privatized the public water service to Cameroon Water Utilities (Camwater), it thought it had chosen the right solution. This was not the case. The promised infrastructure has not been built, and the price of water has increased. Women, children, girls and people with disabilities were the most affected. This is when the ACA began to advocate for the state to take back control of the water sector.

Following successful examples from external partners like Environmental Rights Action/Friends of the Earth Nigeria (ERA/FoEN) in Nigeria, the ACA began to take action, taking into account the specificities of Cameroon. The organisation began by asking the population if they knew that water is a human right. Statistics revealed that a vast majority of the population is unaware of this right. Hence, awareness-raising campaigns followed on the field. Once this was done, the organization went on to identify different groups (trade unions, religious groups, civil society) and created a coalition to share a common idea, that of claiming the water right.

One of the main difficulties in this process was to be heard at the state level, as the organization of marches was systematically forbidden, as such, the ACA opted to organize meetings with members of government, ones that included international partners. These actions contributed to the termination in October 2018 of the concession between the State of Cameroon and Cameroon Water Utilities, making Camwater the public company in charge of the production and distribution of drinking water in the country.

On 13 October 2021 in Yaoundé, the ACA took part in a public demonstration to denounce the role of the World Bank in the privatisation of water management in Africa. Together with partners such as Corporate Accountability and Public Participation (Nigeria), Corporate Accountability (USA), Public Services International and End Water Poverty, the ACA rejects all forms of corporate control and privatisation of water services, including through Public-Private Partnerships.

The ACA will not give up its fight as long as the cloud of privatisation hangs over the water sector in Cameroon. “Our challenge today is to have the right to water recognized in the Cameroonian constitution, as is the case in Kenya,” Abbosouka says. This civil society actor remains vigilant in the face of suspicious manoeuvres, undertaken according to him by groups like Veolia and Suez. “The private sector is using a new technique by creating problems between the company that manages water and the minister in charge to come and present itself as a saviour,” he warns.

The African Center for Advocacy’s Keep Water in Public Hands project is one of twelve inspiring stories of local transformation shortlisted for the 2022 Transformative Cities People’s Choice Award. Transformative City is a global process to search and support transformative practices and responses that are tackling global crises at the local level. You can still vote for the initiative that you find deserves more attention and resources to scale up until the 6th of November at: https://transformativecities.org.

As Another Anglophone Detainee Mysteriously Dies In Prison: 115 Co-Detainees Petition Administration Over Threats Of Physical Elimination