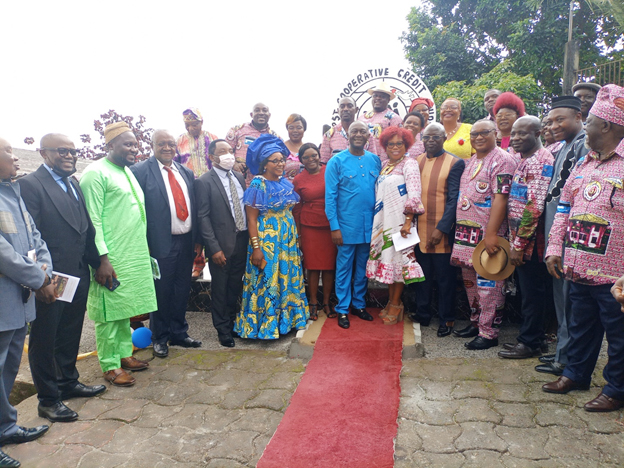 The Buea Post & Telecommunication Co-operative Credit Union (BPTCCUL), better known as P&T, has celebrated its 50th anniversary with a call for more members to join the union.

That was on Saturday, November 20, at its headquarters opposite Buea Central Police.

During the anniversary, the institution unveiled a balance sheet of FCFA 4.1 billion against 2.5 billion 10 years ago.

It equally boasted that it has a membership of about 10,000 members 50 years down the line.

Aside from the numerous achievements highlighted, the President of the Board, Charles Mwambo Mbella, said BPTCCUL now has branches in Yaounde, Molyko, Idenau and the Head Office, and still intends to open more branches.

Created in 1971, Charles Mwambo said the successes of BPTCCUL are wonderful, adding that they “have gone from stage to stage” and now are at over FCFA 4.1 billion balance sheet.

He added that they are also embracing the modern banking system, that is, Visa Cards, and payment of salaries for so many companies and even civil servants.

The Golden Jubilee, he said, “is a day we are celebrating success for 50 years of business, viability, credibility and everything”.

Just with the number of branches available, Charles Mwambo said, in the next two years, BPTCCUL will be having more than just five branches.

“I am encouraging the public to come and open the accounts and borrow that we are liquid. We have money that they can borrow out to increase their livelihood,” he said, adding that one needs just FCFA 35,000 to open an account.

To him, the interest rate is very friendly to members, be it salary earners or borrowers.

BPTCCUL could not count its successes in isolation. They invited Fako Senator, Charles Mbella Moki, Buea Mayor, David Mafany Namange and President of the league of Co-operatives in Cameroon, Musa Shey Mfor, who is also Mayor of Nkambe and President of Bamenda Police Co-operative Credit Union.

As President of the Cameroon League of Co-operatives, Shey Musa said BPTCCUL is one of the main credit unions within the Fako Chapter. He said he came to encourage members and the BPTCCUL board for the wonderful work they have been doing for 50 years, and to urged them to do more.

“I am impressed with what I have seen in terms of the quality and outreach,” he affirmed.

The event was graced by the unveiling of the 50th anniversary symbol.