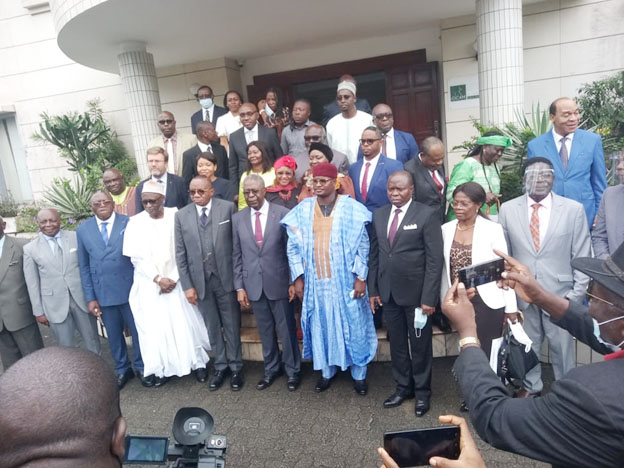 The National Commission for the Promotion of Bilingualism and Multiculturalism, NCPBM, has met with the Cameroon Employers’ Association, GICAM, in Douala to evaluate the level at which laws on bilingualism, hate speech and xenophobia are being implemented in the sector.

During NCPBM’s week-long mission to Douala, the commission’s President, Peter Mafany Musonge, hailed GICAM’s promotion of good corporate social responsibility, which is going to help in the promotion of the two official languages of the country.

Talking to The Post, Musonge said: “Today’s meeting is quite symbolic in that it is the first time the entire Commission, since its creation, is coming to the Littoral Region. As you are aware, in 2018, the Commission carried a listen-to-the-people mission in Buea, regional headquarters of the Southwest and Bamenda in the Northwest. Littoral and West Regions were next on our list, but Circumstances beyond our control forced the Commission to defer the mission to a later date”.

He also tasked GICAM to help implement the 2019 law on the promotion of bilingualism and multiculturalism in order to give English and French equal status in the country. He added that the meeting was also symbolic because it was the NCPBM’s first mission to the private sector.

Meanwhile, GICAM President, Celestin Tawamba, promised “to do a lot after this meeting. We are going to set up Article 4, and take the responsibility to share this law to all our members and make them to understand that, being bilingual is not only important to our country, but offers a lot of opportunities as business people.” He added that the commission should play its role in solving the identity crisis that has fuelled the conflict in the Northwest and Southwest Regions.

Article 4, which Celestin Tawamba talked about, states that: “The State shall encourage the promotion of official languages in private entities, employers’ and labour organisations, civil society organisations and voluntary agencies.”

Created by Presidential Decree No2017/013 of 23 January 2017, the NCPBM is an advisory body that monitors the implementation of constitutional provisions establishing French and English as two official languages of equal status, and especially ensuring their use in all governmental services, semi-public bodies as well as any State-subsidised bodies.

Issues At Stake: Hell Of Torture, Reign Of Terror

At Promote, UK Pavilion: Women Urge To Be Innovative, Trust Themselves While In Business