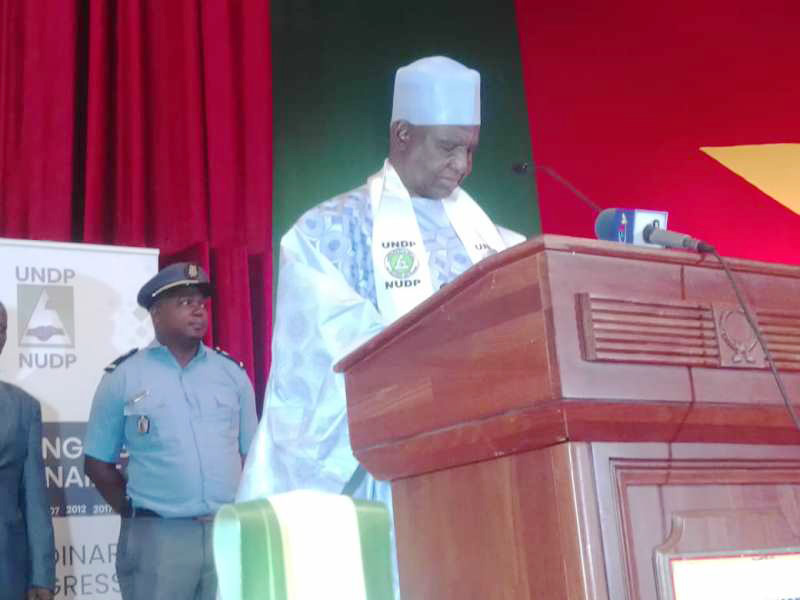 The man who made history in 1992 by leading the opposition party, the National Union for Democracy and Progress, NUDP, to grab 68 seats at the National Assembly, Bello Bouba Maigari, has been elected as Chair of that party for the 7th time in 30 years.

He was re-elected during the 7th ordinary congress of the party that took place over the weekend at the Yaounde Conference Centre. Thus, the over 1,500 delegates bestowed their confidence on him once more to steer the ship of the party for the next five years.

Bello Bouba who is the Minister of State in Charge of Tourism was elected the NUDP Chair for the first time in 1992. He was re-elected in 1997, 2002, 2007, 2017. In terms of representation in state institutions, the NUDP is the second political party after the ruling CPDM party.

Addressing delegates and guests during the opening ceremony of the congress on Saturday March 5, Bello Bouba, said the main preoccupation of his party remains the onslaught for electoral reforms that would lead to the consolidation of democracy and peace in the country.

This preoccupation constitutes the mainstay of UNDP-CPDM platform for dialogue that was put in place in 1997. While commenting on the Southwest, Northwest and Far North Regions that are hard-hit by crises, Bello Bouba, said the path for dialogue should be the main highway to follow in the bid to arrest the conflict.

According to him, the Major National Dialogue that President Paul Biya convened in 2019, was not an event but a gradual process that has continued internally in many different forms.  Bello Bouba said the best way for the state to regain the confidence of people in these areas is to provide them with good roads, health, educational infrastructures as well as other social amenities like water and electricity.

Harping on the issue of youth employment, the NUDP Chair called for the consolidation of reforms that would help to boost the national economy so as to create jobs and wealth. He called for the reinforcement of the modernisation and professionalization of the country’s educational system so that it can churn out only young people that are needed in the job market.

In the health domain, Bello Bouba urged people to continue to respect the barrier measures government has prescribed against the global pandemic, Covid-19. He said his party was waxing strong, but called on his comrades to work harder for the consolidation of the party’s structures in such a way that it can score more victories in the next national elections.

During the heavily attended congress, leaders of friendly political parties presented messages of goodwill to the party. They are: Gregoire Owona of the CPDM, Prof. Maurice Kamto for the MRC, Issa Tchiroma of FSNC, Patricia Ndam Njoya, Anicet Ekane of MANIDEM and Robert Bapooh Lippot of the UPC among others.

The speakers saluted the role the NUDP played in maintaining the stability of Cameroon in 1992 when the nation was at the crossroads.  Apart of Jean de Dieu Momo who was booed and jeered for using the occasion to tacitly attack Prof. Maurice Kamto, all other speakers were highly applauded. But the applause slipped into an-anti-climax when Jean de Dieu tacitly accused Kamto of sending his party comrades to destroy Cameroonian Embassies in some Western countries.

After its dwindling electoral fortunes in the past years, NUDP has begun to wax stronger again. The party has seven seats at the National Assembly and two appointed senators from the Littoral and Adamawa Regions. During the last municipal elections, the party won a total of 17 councils, mostly in the three Northern Regions. It controls four councils in the Far North, three councils in the North, nine councils in the Adamawa and one council in the East Region. Besides, the Ngoundere City Council is fully in the hands of the NUDP. The party equally has the majority seats at the Adamawa Regional Council.