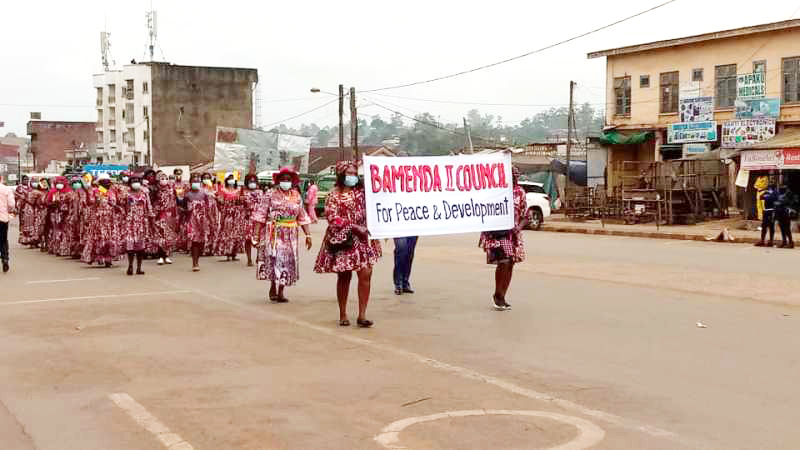 Women in Bamenda, chief town of the restive Northwest Region of Cameroon have expressed disdain after Governor Adolph Lele L´Afrique failed to acknowledge military atrocities on them.

During his talk to the women on Tuesday, March 8, marking the 37th edition of the International Women´s Day at the Bamenda Commercial Avenue Grandstand, Governor Adolph Lele L´Afrique saidmany women have been rendered homeless as a result of the ongoing socio political crisis the Region.

He added that, the crisis caused by separatists has made many women to flee their home at a time when the government is doing everything to protect the rights of women and young girls.

The Governor’s outing did not go down well with many women as they expressed their discontentment.

“I am disappointed” N. Gorretti said adding that, “at a time when we need peace the most; all sides should be able to accept their responsibilities.”

As a Woman, she thinks that blaming Separatists for reason why many women are displaced is good. “However we should not behave as if government forces are free from the accusations. Many villages have been razed by the military and this has caused many women to flee,” N. Gorretti told The Post.

M. Nkwenti is a woman who says she now hosts other women in her compound after they suffered military atrocities.

“I host a widow in my compound at up station. She was a landlady until her compound was burnt down by Soldiers along the Bamenda-Mbengwi road. Was that not a crime against a woman by government forces, why hide their atrocities and think we can achieve peace by blaming one side? Peace is never achieved like that,” she pointed out.

Another woman who spoke anonymously, narrated how she has been rendered jobless by government forces that burned down her restaurant at Randezvous Junction on February, 11.

“They burnt down the same restaurant they usually eat from, a young girl was shot in the leg”she said.

The Post was able to authenticate the information about the restaurant that was set ablaze, not the shooting and the identity of those responsible.

However, those who said they saw what happened blamed government forces. A shop owner around that area said he saw them setting fire on the lady’s restaurant.

Many women have continued to suffer in the hands of all the actors in the armed conflict with many of these acts well documented.

As the celebration went on, many questioned why Northwest administrations hardly blame publicly their forces for some of the atrocities.

Women Call On All Side To Silence The Guns

As the war ravaging the Northwest and Southwest Regions continues unabated, there have been calls from the women for all sides to give peace a chance.

Speaking on behalf of the women on Tuesday, March 8, as they celebrated the International Women´s Day, Wirba Jeroline said: “We the women in the Region are calling on all actors involved to give peace a chance.”

According to her, they are tired of burying their children. “Many women have lost their lives, we have wept and wept until our eyes are dry, and we are tired of the bloodshed,” she said adding that, Security challenges have caused women to abandoned their farms.

For meaningful and sustainable development to see the light of day, Mrs Wirba underscored the need for both women and men to work together.

She however decried that, this can only be available when there is peace.

Ahead Of COP26: Commonwealth Youths empowered to address Climate Change