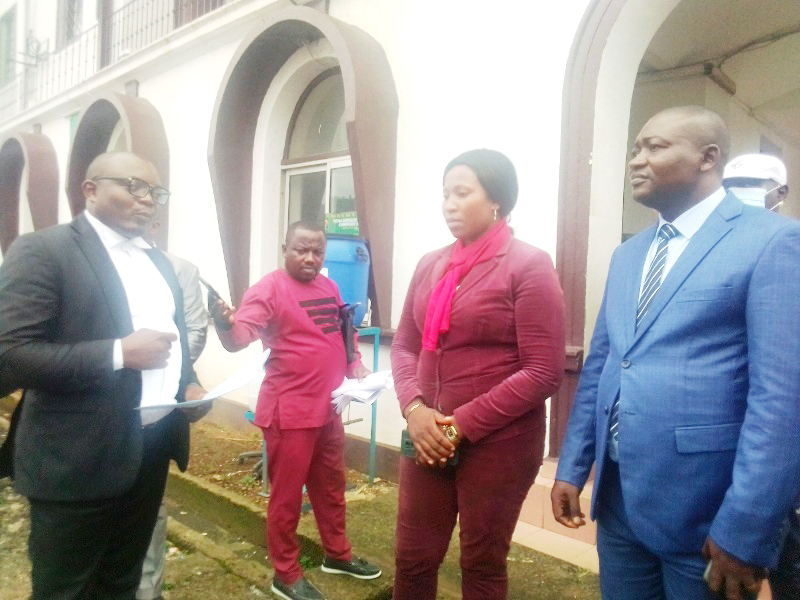 The Southwest Regional President of the National Youth Council, NYC, Barrister Vitalis Ligenju, on Friday, March 11, led hundreds of his members and other youths to Limbe to thank the Head of State for the recent election of one of them, Prince Paul Efome Ngale, as new Limbe City Mayor,.

Barrister Ligenju, who was accompanied by other NYC President’s in the Region, expressed the NYC’s immense appreciation through two “Thank You” memos addressed to the Head of State, Paul Biya.

The Memos were first read out during a thank you gathering at the Limbe Conference Centre to the hearing of the New City Mayor. Barrister Ligenju, accompanied by the new City Mayor, then moved to the Fako SDO’s Office, where they handed the memos to the First Assistant SDO, Mariline Yefon, for onward transmission to the Head of State.

It was on March 4, that councillors in Limbe sat and elected Councillor Efome Ngale as the new City Mayor for Limbe.

His election was made possible by the fact that President Paul Biya had already endorsed Councillor Paul Efome as his choice to replace the late Andrew Motanga. Thus, Councillors simply had to confirm the President’s choice with their votes.

The election of Efome, who is the Fako President of the NYC and also the National Scribe of the Council, seems to have motivated a lot of youths in Limbe and across the entire Southwest Region.

Councillor Efome’s choice seems to have touched many and has pushed many a youth to the belief that Biya is now poised to fully empower the Cameroon youth to take up leadership positions.

It is for this reason that Barrister Ligenju was in Limbe in the company of hundreds of other members, others from the Motorbike riders association, Limbe Technicians Association, Taxi Drivers and others to celebrate the coming into the City Mayoral office of one of them and the appreciation of the move by the Head of State.

The gathering was facilitated by the National Youth Council for Limbe II, led by Ndumbe James.

He used the occasion to throw more light on the new Mayor’s background. He disclosed that the new City Mayor whom he described as hardworking, dynamic and down to earth came from a very humble background. He disclosed that many have not been able to comprehend how Paul Efome Ngale, who, professionally, was once a TV and Radio technician, could have been elected to become the new City Mayor.

When the new City Mayor took the microphone, he said he was a TV and Radio Technician and, at the time, it is what put bread on his table and enabled him to be able to do other businesses. He advised the audience never to minimise whatever thing they do in life. “If you are a technician, do your best to do your work well.”

The new City Mayor later on decided to further his education. Today, he is a final year Master’s Degree student in Political Science at the University of Buea.

The City Mayor thanked all the youths and promised them that he was there for them. He, nevertheless, made them to understand that his current mandate as City Mayor is not long. He said he is simply completing Motanga’s mandate, which elapses in 2025. Given the short span, he will not be able to do everything needed to satisfy the needs of the people of Limbe. He, nevertheless, said he will do his best to see what he can do improve on the development of the City.

“I know that the main aim of local councils is to bring development to its people and make them to live well.”

He went on to thank Barrister Ligenju and all the youths for their support to him.

“This day today marks the beginning of a new Dawn in Cameroon,” he said.