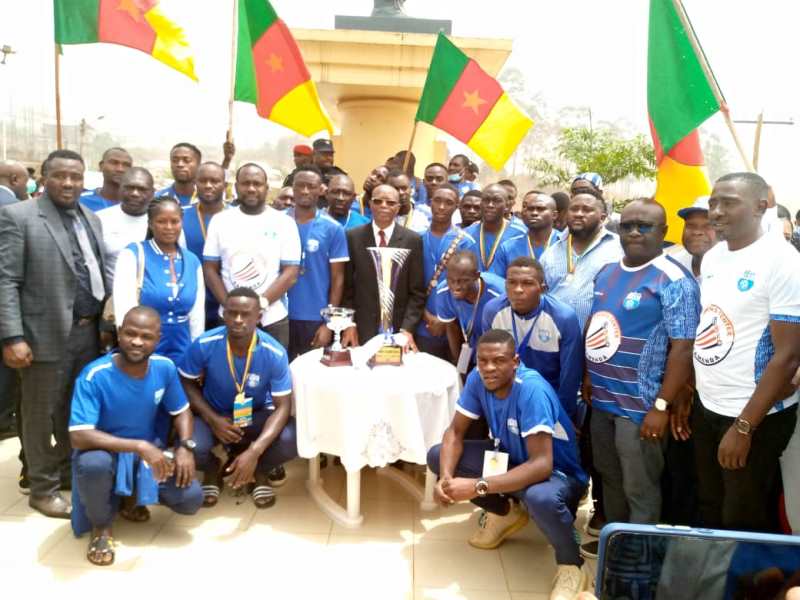 Pascal Abunde, President of the Public Work Department, PWD football, has again, like others in the Northwest Region of Cameroon, called for the construction of a befitting stadium in the town of Bamenda.

His call came as the PWD, 2022 Cup of Cameroon, winners, touched down in regional headquarters and presented the trophy to the football fans and lovers on Thursday, March 17.

“We are tired of waiting, we don’t want to hear any promises again, we just want to see works get started,” Pascal Abunde said.”

After emerging champions of Cameroon among other titles he believed that “there is no other thing we need to prove to get what we truly deserve.”

At the occasion in which PWD President made his request like others, was Northwest Governor, Adolph Lele L’Afrique, who was spoted holding a placard together with a PWD player asking for a stadium in Bamenda.

The Governor told football lovers at the Commercial Avenue Grandstand that the dust raised by the lack of stadiums in Bamenda has not settled yet.

He revealed that after the Cameroon Cup Finals, the Prime Minister, Chief Dr. Joseph Dione Ngute, called and discussed with him a wide range of issuesm, among which, he stated, was the construction of a stadium and the deplorable roads. The Governor was hopeful that action will be taken soon.

Meanwhile, some members of the Bamenda have continued to doubt what they termed “empty promises”, saying they can only be convinced when work has started.

Yanick Ndifor is a PWD fan. He said the promise to construct a stadium is not something new.

“Did the Prime Minister not say as soon as he gets to Yaounde, work was going to start, has the work started or is he still on his way to Yaounde?” he quibbed referring to last year when the PM was in Bamenda.

Yanick Ndifor, like the rest of the Northwest population, decried that the Region has waited for too long the Bamenda Municipal Stadium, yet nothing is happening.

The Northwest Region of Cameroon has five clubs in the professional league, both in the men and women categories, yet, there are no better football pitches.

Their only hope has been the Yong Sports Academy Arena located at the Mile 6 neighbourhood in Nkwen where, despite the challenges, players and fans have been able to move there for the game of football.

He visited the abandoned Bamenda Municipal Stadium and said the present state of the stadium only makes him cry.

“When I look at the stadium, I feel like crying, my heart is broken,” Maboang told the press last month at the dilapidated Bamenda Municipal Stadium.

The population of Bamenda, especially lovers of football, say they will not relent until their demands are met.

During the Cameroon Cup Final in Yaounde, they carried placards decrying the lack of a stadium in Bamenda. That the same message was still echoed on placards at the Mbouda Municipal Stadium in the West Region during the launching of the Cameroon Football season, Elite One Championship.

Local Players At Crossroads As Coaches Demand Money For Play