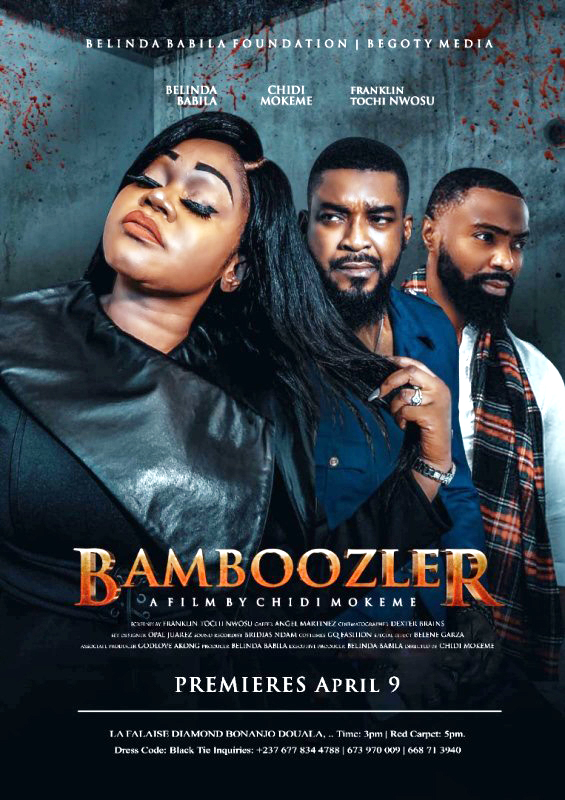 Begoty Media, the entertainment arm of Belinda Babila Foundation is pleased to announce to the public, a global tour of its first ever movie “BAMBOOZLER, to begin on April 9, 2022, at La Falaise Diamond Bonanjo Douala.

“Bamboozler” will begin a global premiere tour on April 9 and April 16 in Douala and Yaounde, respectively.

Goal of the movie Project

The goal of the movie project is to raise money and set up a multipurpose training Centre for IDPs, youths, orphans, widows, street children that will empower them with skills that will make them to be self-sustainable. Vulnerable IDP Girls, single mothers, widows and  orphans will be trained on skills acquisitions such as craftsmanship, sewing, hairdressing, beads making, Catering, makeup, just to name a few.

After surviving a string of heartbreaks, Thatcher Akong, a beautiful highflying Pharmacist’s quest for love leads her into the dark and deadly world of serial womaniser and playboy, Jax (Chidi Mokeme), and Kojo (Franklin Tochi), a demented maniac, and serial killer. Will this encounter be the final straw? The stage is set for a deadly, entangling web of illicit romances and gruesome murders. Hell, hath no fury…. Can anyone survive?

Log Line: A woman’s quest for love leads her into the dark and mysterious world of a serial womaniser and that of a demented maniac and serial killer.

The film is intended as a conversation starter to explore and deepen the discuss around the universally held notion that “hell hath no fury like a woman scorned…. (And I dare add) nor a man with bruised ego.” The use of explicit intimate encounters is my attempt to give the film a depth of erotic authenticity that I hope will make it more engaging for the audience and invite viewers to a deeper understanding of the concept of sex as a tool, and to challenge them to look at the subject of sex as a major weapon, and how the intentions behind sex, and the abuse of such intimate moments, can be the trigger not only for passion crimes, but indeed the central motivation for a lot human action.

Regardless of race, ethnicity, gender, or sexual orientation, the sex act is the most common universal activity that the entire world engages in, and can relate with, but it is still arguably the least understood phenomenon. So, in this film, I imagined the sex act as a character of its own that needed to be explored and exploited all through the movie, peeling back the layers and revealing more and more as the movie progresses, and this can be seen right from the prologue where the opening establishment shot is accompanied by sounds of moaning, and setting the stage for what is to come. The film attempts to liberate rather than encapsulate the subject of sex from the clutches of the ‘taboo’ tag imposed by society and hopefully challenge the audience to take a step back and view the sex act through different prisms. Sex was at the centre of the plot. Like in the real world where sex is about the only activity that means the same thing everywhere in the world, yet everyone shies away from the topic, the characters in the film represent diversity in opinions, personalities, orientations, beliefs, aspirations and so on, yet, almost every character in the movie is united by, and engages in one form of sexual encounter or the other, but for totally different reasons and it means different things to each one of them. BAMBOOZLER is intended to challenge the audiences thinking, to acknowledging that moments of intimacy mean different things to different people at different times, and to demystify the general outlook on sex and democratise the discussion around it. It is a reflection of my abstract thoughts and philosophical take on the idea that the world somehow revolves around sex. Sex, and sexual desires are the weapon of choice and deployed without hesitation as a tool both for good and for bad. The audacity and depth of intimacy is intentional and deliberate and intended to advance the story. It is intended to be spicy but not obscene.

As an established actor constantly transiting between locations in Nigeria, Africa and the USA, I’ve come to recognise that there is a huge population of Africans in the diaspora who crave stories that they are familiar with. Nollywood films sort of fill in some of the gaps but still leave much to be desired because, even though the diaspora community welcomes movies whose origins they can relate with, stories that depict their present circumstances, and their current travails, challenges and victories as immigrants, are largely untold. And there’s a hunger in that demographic for stories that resonate with them.

I take every opportunity to share my dream and mission of bridging that gap and taking over that space through the production of movies with cross-cultural stories that highlight the conflicts and cultural differences faced by immigrants in their host communities as the world becomes an interconnected global village. I am a huge fan of fast-paced action and adventure thrillers, and always thought my directorial debut would be a statement, first to the Nollywood film industry that real action movies are possible in our clime, and secondly, a message to the rest of the world that Nollywood was ready. And even though this script was not the fast-paced action thriller I had visualised debuting with, I couldn’t pass on the opportunity to break the jinx and take on the sensitive taboo topic.

BAMBOOZLER started as part of a conversation I had with Dr. Belinda Babila when she shared her vision to make ‘movies for a cause’ as a fundraising medium to support her humanitarian work, and we discovered we shared a lot of common ground as far as our passions and ambitions were concerned, and so the ‘take over’ mission was birthed. She was already working on a short film idea to test the waters and Bamboozler was immediately proposed as an expansion of that short film into a full feature film. As Executive Producer, Dr. Babila assembled this ensemble of creative people who were hungry to showcase their talent and it was such an honour to collaborate with this community of creatives sharing a common dream to create a platform that enables us, tell our own unique stories to the world. I joined the team first, as the lead actor, and I couldn’t resist when I was asked to use my experience to help bring Bamboozler to the big screen. Franklin Tochi Nwosu was commissioned to write the expanded script, after which I did some additional scripting in line with my vision. My vision was to make a film that combines romanticised erotic appeal with a dark, dangerous revenge thriller narrative. I discussed my artistic vision with the gifted Director of Photography, Dexter Brains, whose editing captures the tone and the rhythm, and we set out to tell a story that promises to, not only deliver a potent combination of danger and romance, but will definitely appeal to both male and female audiences irrespective of their sexuality, while putting the spotlight on crimes of passion. And that’s really our primary selling point.

Without any moral judgment on the rightness or wrongness of the actions of the perpetrators, the audience is forced to become the detective, with the hope that it challenges the viewers to examine their own prejudices and draw their own individual conclusions.

Produced by Belinda Babila and co-produced by Chidi Mokeme, “Bamboozler” is set in the modern metropolis of Dallas, Texas, and chronicles the life of Thatcher (Belinda Babila), a beautiful highflying Pharmacist, whose quest for love leads her into the dark and deadly world of Jax (Chidi Mokeme), a serial womanizer and quintessential playboy, and a demented maniac, and serial killer, Kojo (Franklin Tochi Nwosu). The stage is set for a fatally dangerous, entangling web of illicit romances and gruesome murders.

Chidi Mokeme helms ‘Bamboozler’ as his feature directorial debut and co-produces, while Franklin Tochi Nwosu wrote the script. Producers include Belinda Babila, also executive producer, and Godlove Akong for Begoty Media. This collaboration is the first of many projects coming as part of Belinda Babila Foundation’s “Movie for A Cause” Initiative.

If you like revenge thrillers, psychological thrillers, and stories of illicit romance and sexual obsessions, BAMBOOZLER is for you. Female desires, both sexual and otherwise are at the centre of this story.

Love With My Mumu Lover