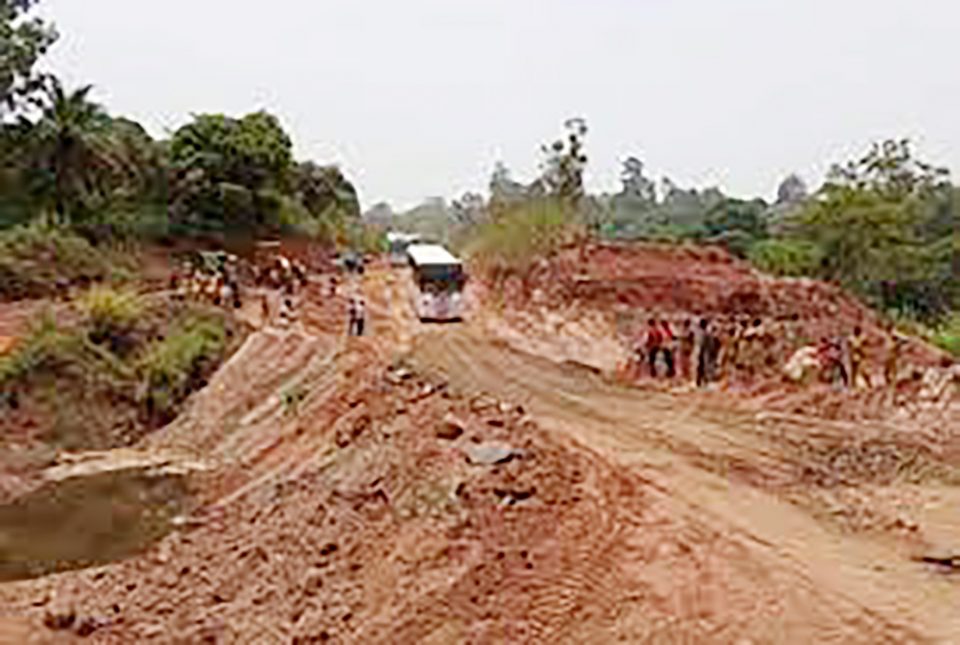 Observers are wondering why the construction of the Babadjou-Bamenda road has remained a subject of procrastination despite several promises by the authorities.

When the Prime Minister, Chief Dr. Joseph Dion Ngute, visited Bamenda last year, he promised that immediately he returned to Yaounde, construction works would begin along the Babadjou-Bamenda section of the road. Despite the good intensions manifested by the Prime Minister, no work has started there yet.

Several high profile meetings have been held in the Prime Minister’s Office with respect to this project in particular and reconstruction of the Northwest Region in general. Several government officials, including the Ministers of Public Works, Public Contracts, Urban Development and Finance attended the meetings, chaired by the Secretary-General at the Prime Minister’s office.

The outcome of these meetings, were expected to culminate in the beginning of construction work on the road. Unfortunately, nothing has filtered out to that effect so far. Thus, the main access road into the Northwest Region remains a nightmare. It is still that narrow snaky stretch with potholes that are yawning into full-blown craters. Given that one of the main grievances of the former Southern Cameroonians was the poor road infrastructure, one could not have imagined that the statusquo would still be in place five years after the beginning of the crisis. That is why observers keep wondering why the execution project continues to suffer inertia despite the commitment of funding organisations like the World Bank.

Government has often branded insecurity as the main reason for the delay. But, critics hold that if that were the case, they would have long constructed the Babadjou-Matazem portion of the road that has no security challenges. Again, the issue of insecurity has been roundly dismissed, given that the majority of Public Investment projects in all Divisions of the Region are on-going. Critics equally add that insecurity can no longer be the main reason for the delay of construction work on a heavily guarded and secured highway like Babadjou-Bamenda.

The Post learnt that, the contract for the construction of the first portion of the road from Babadjou to Matazem (17km) that was awarded to BUNS Construction Company was signed on Wednesday, March 2, 2022.

Following the submission of tender files on this road section to the tender’s board of the Ministry of Public Works on December, 15, 2021, the tender’s board announced the winner, but the official contract has not been signed.  Sources hold that, all the supplementary studies going on now in the field are in anticipation to gain time and avoid the nasty situation of the rainy season.

However, it is alleged that the project will only start by the end of April and will be executed in 18 months. The same situation holds sway for the 18km section from Matazem to the entrance to Bamenda where, there is a billboard with inscription “Welcome to Bamenda”. The contract that was awarded to BUNS is yet to be signed. The entrance from Mile 8 (Akum) to Bali (21Km), which was abandoned in 2018 at the peak of the current crisis, has been listed in the 2022 Public Investment Budget for completion. But, some technical experts have complained that the FCFA 500 million the Minister of Public Works allocated for the project is too small to complete the project. It is reported that many tasks which were completed in 2018, have to be repeated.

Despite high expectations, it is likely that the Bamenda urban road network may not be developed this year if the authorities do not accelerate all administrative procedures. In 2021, EDGE Construction Company made some attempts to start the reconstruction of a circa 12 Km road in Bamenda town. But, due to the non-respect of administrative orders (as indicated by officials of MINTP) all work was suspended till further notice. Government insiders say EDGE could have lost the contract to reconstruct this section of the urban road network but, for the fact that it won a major technical point with respect to the size of the carriageway. The Ministry of Public Works later requested feasibility studies for the consideration of a 30m width carriageway (from the initial 18,7m carriageway)

After the suspension of construction activities, the World Bank has constituted a fact-finding mission to investigate the destruction of property which had not been paid for. The program is currently on-going in order to give the funding authority all the required information, to pave a way forward for the construction of the urban road network to begin.

The French Development Agency, through the French Debt Relief and Development Contract, C2D, programme, has completed its studies and tender files for the construction and rehabilitation of 32Km of urban roads within Bamenda. This will also include the construction and rehabilitation of modern markets for all the councils which make up the Bamenda City Council area as well as a modern bus Station at the present motor park in Mendankwe (Bamenda 1). An urban drainage line that will cut across the main section of the town as well as a liquid waste disposal plant have also been earmarked for construction.

The Post gathered that, tenders for the 32km road sections of these C2D projects were launched last year and the results were withheld in order to solve the problems which may arise with the destruction of property during the construction of these roads. The Post was equally informed that, a commission is in the town doing the evaluation for the compensation of those whose property shall eventually be destroyed.

According to inside sources, French experts are currently reviewing the market sheds, slaughter houses, drainage and waste disposal plants in order to adapt them to local needs before the tender files for these structures shall be made public for interested companies. Even before the execution of these projects begin, some people are already playing Oliver Twist, claiming that, the investment on road  infrastructures in Bamenda in particular and the Northwest in general is too little and equally trapped in so much delay.

They hold in their comparative analysis that between 2017 and 2021, 110 Km of urban roads were constructed and rehabilitated in Bafoussam. Even after the African Cup of Nations tournament, they claimed, construction projects are still going on with the reconstruction of markets in Bafoussam.

After raising hopes last year, the authorities are yet to say anything concrete about the construction of the second phase of the ring road which is a 96 km stretch that spans from Kumbo in Bui Division to Misaje in Donga Mantung Division and to borders with Nigeria. The authorities announced and made tenders for the project 2020-2021. Going by official sources, government had already contracted a loan of FCFA 1.06 Billion with the African Development Bank for the execution of this project. Since then, the tender results have never been made public despite the courage the interested companies demonstrated by visiting the entire road network at the peak of the current security crisis.

They did the full circle, passing through Ndop, Kumbo, Ndu, Nkambe and eventually to Misaje which was enough to prove to the project owner that, the construction work can go on just as Public Investment projects are going on in these areas. At one time, sources say, the authorities contemplated cancelling the tender but the Minister of Public Works declined doing so. But till date, nothing has been said about when and which company won the tender.

There are solid arguments to the effect that, insecurity can no longer be the reason for the non-execution of projects in certain parts of the region. For example, projects are on-going in and around Ndonga Mantung Division. They are providing irrigation schemes to local farmers as well as bore holes for the provision of portable water. This is enough proof that construction projects can go on despite the crisis.

It is alleged that, the Prime Minister’s visit to Nkambe in weeks or months ahead, is seriously loading. Thus, there is hope that, one of his reasons to visit Nkambe is to launch this vast project that will render many areas in Ndonga Mantung and its neighbouring divisions (Ngohketunjia and Bui) accessible. Thus, the launching of the second phase of the Ring Road as well as the construction of the bypasses into Nkambe through Magba, into Kumbo through Foumban and into Ndop through Galim, is likely to be the big scoop any time the Prime Minister visits Nkambe.

For nothing, the authorities have repeated carried out feasibility studies on the construction of the Bamenda-Wum and the Bamenda-Mbengwi road projects. They have made many promises with respect to these projects. But their words and actions remain in two different worlds. That is why, many people are wondering when such promises will be fulfilled. Moreover, several complementary studies have been made since the lake Nyos disaster of 1986 stroke. In almost every rural community in the Northwest Region, there is a legacy linked to the lake Nyos disaster, either with displaced families who have never returned or with families who lost their loved one in this disaster.

The authorities designed some projects aimed at improving the lives of the people around the Nyos village, but the fundamental technical project has never been executed as was advised by experts. One of the projects was conceived to construct a retaining wall on the section of the lake where erosion had reduced it to barely 45m of width. Experts warn that, if the wall is not constructed, the lake could one day break bounds and its waters could sweep villages as far as to Nigeria. A FCFA 75 Billion project was programmed for the construction of this retaining wall in 2010. But so far, nothing has been done. It remains a real enigma as to why such life-saving projects have been abandoned for many years. Many of the projects have missed set targets several times with government often citing lack of funds for its failure to implement them. This happens against the backdrop of widespread suspicion that funds are being misused or diverted to other uses.