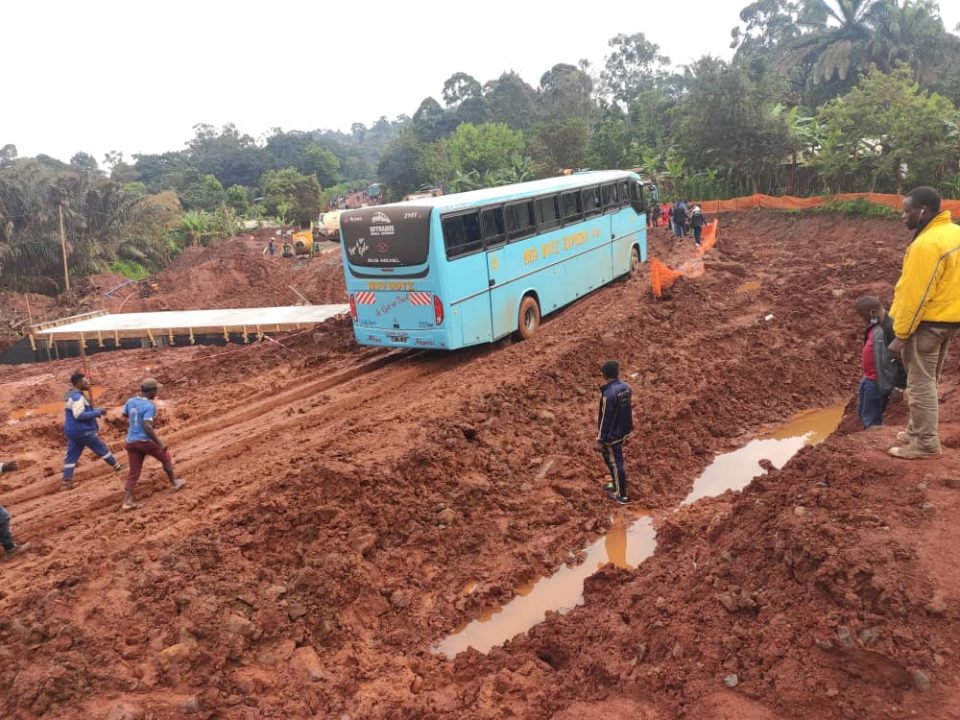 Why Not Contract Military Engineering Corps For The Job, Like In Boko Haram Affected Areas?

A controversy has sparked off following the decision by the Biya Government to award the contracts for the long-delayed project for the rehabilitation of the  52 km long Babadjou – Bamenda Road  to civil engineering companies, instead of the military engineering unit commonly known by the French appellation, ‘Genie Militaire’.

This is considering the high level of insecurity that reigns on that stretch of road, due to the ongoing armed conflict in the Northwest Region – A situation that makes road rehabilitation a very risky project for civilian companies.

This has raised questions about the government’s seriousness to want to see the Babadjou – Bamenda Road, which has so badly broken down, effectively rehabilitated.

Northwest Is A War Zone

It is no secret that the Northwest Region is a war zone, and so the Matazem (Santa) – Bamenda stretch of the Babadjou – Bamenda Road which is programmed for rehabilitation, is inside a war zone, with all types of insecurities and threats.  What, for example, happened at Matazem on October 5, 2021, when Prime Minister Chief Joseph Dion Ngute made a stopover as he crossed from the West Region into the Northwest on his way to the regional headquarters, Bamenda, reminds us of the high state of insecurity in the Northwest Region in general.

There have even been cases where suspected separatist fighters have stormed the security post at Matazem, and left behind casualties.

Even the Babadjou – Matazem stretch of road is not safe. Babadjou is one of the localities in the Francophone part of the country that has been seriously affected by the escalation of the Anglophone Crisis. Suspected separatist fighters from Santa and Pinyin apparently, in their strategy or treats to push the war into the Francophone part of the country, have several times stormed Babadjou at night, leaving behind casualties and destroyed properties.

And so for the Government to have decided to give the contract for the rehabilitation of the Babadjou – Bamenda Road to civilian contractors, whereas there is the Military engineering unit that can better handle such a job in a war zone, raises questions about Government’s real intention concerning that road.

Contractors All Hail From Northwest

Meanwhile, it would be recalled that, a few months ago, the Minister of Public Works, Emmanuel Nganou Djoumessi, disclosed that Government has finally succeeded to negotiate a loan from the World Bank to rehabilitate the Babadjou – Bamenda Road. He also disclosed that the project would be divided into three sections for speedy implementation.

Then, during his recent visit to Bamenda, the Northwest Regional Headquarters, Prime Minister Chief Dr Joseph Dion Ngute disclosed that the contract for the rehabilitation of the  Babadjou – Bamenda Road, has been awarded to three local road construction companies, all owned by entrepreneurs from the Northwest Region.

So, in principle, the Minister of Public Works, Emmanuel Nganou Djoumessi, and the Minister Delegate at the Presidency in charge of Public Contracts, Ibrahim Talba Malla, are the authorities behind the controversial decision that has awarded the contracts for the rehabilitation of the Babadjou – Bamenda Road that has been divided into three sections, to the three local road construction companies.

It would be recalled that, a few years ago, the Government awarded the contract for the rehabilitation of the Babadjou – Bamenda Road to a French road construction company, SOGEA SATOM. But no sooner did the company start work, that it was attacked by a group of armed men at night, and some of its equipment burnt or destroyed. The attack on the road construction company was allegedly carried out by separatist fighters.  The unfortunate act forced the French company to abandon the road rehabilitation project.

A few months ago, precisely in edition No. 2185 of Friday, May 28, 2021, The Post highlighted the sorry state of roads in Anglophone Regions in Cameroon, unlike their neighbouring French-speaking regions.

The pretext that the Biya Government has been using as a defence in recent years is the singsong that blames the state of the Babadjou – Bamenda Road as well as the Kumba – Ekondo Titi Road in the Southwest Region, on the attacks that were allegedly launched by separatist fighters on the road construction companies that were working on those roads, and forced them to abandon the road projects.

But in analysis that The Post Newspaper published last May highlighting the sorry state of roads in Anglophone Regions of Cameroon, the paper pointed out that the Babadjou – Bamenda and Kumba – Ekondo Titi Roads are not the only cases in the country where civil engineering companies were forced to abandon work, after being attacked by armed groups.

The Post cited, as an example, the case of the project to construct the Waza – Tabanga – Amshidi – Kousseri stretch of road in the Longone and Chari Division, Far North Region, to link Maroua to the neighbouring Chad Republic.

Rather, after the French construction company, SOGEA SATOM, abandoned the project for the rehabilitation of the Babadjou – Bamenda Road following an attack allegedly carried out by separatist fighters, the Biya government has gone ahead to still award the contract for the project to civilian companies, instead of giving the job to the ‘Genie Militaire’ as she did in the Far North Region.

This raises questions as to whether the Government is interested in seeing the dilapidated Babadjou – Bamenda Road, which is the only national road that links the Northwest Region to the Francophone part of the country, effectively rehabilitated.

Why Are All Three Contractors From NW?

Furthermore, it is not a coincidence that the three contractors selected for the rehabilitation of the Babadjou – Bamenda Road, are all from the Northwest Region.

Why is it that, when the Chinese Company that was constructing the Waza – Tabanga – Amshidi – Kousseri Road in the Far North Region abandoned the project because of insecurity, the Biya Government did not pass over the job to contractors that hail from the Far North or Grand North. Rather, considering the security situation, the Government rightly passed the contract to ‘Genie Militaire’.

Some observers think that the award of the contract to contractors who hail from the Northwest Region falls in line with what looks like the new policy of the Biya regime on the war in the Anglophone Regions, which is to send most people who hail from the two regions, to go and confront their “brothers” (separatist fighters). So if the construction firms are attacked, the contractors will be told that they have been attacked by their brothers.

It has been observed that, having probably come to grips with the reality that there can be no military solution to the Anglophone Crisis, the Biya regime that has continued to run away from having a dialogue with the right actors to end the war, has instead seemingly adopted a new and controversial policy. It is alleged in recent transfers of personnel carried by some ministries, most of those transferred to the Northwest and Southwest Regions, are people who hail from those two war-torn Anglophone Regions. This is to say, if Amba boys want to confront or kill anybody for whatever reason, it should be their brothers and sisters, or tribes people.

The new policy of the Biya regime on the war in the Anglophone Regions has also been observed to be to mount pressure on elite, parents or close relatives of Amba boys in particular, and on the people of the two Anglophone Regions in general, to go to the bushes in their different villages or localities, and tell their children, brothers or fellow tribesmen to drop their weapons.

The Biya regime is now behaving as if the elite, parents or tribes people of Amba boys were the ones who, in the first place, told the boys to pick up arms against Government troops. The regime is behaving as if the people of the Northwest and Southwest Regions have power or authority over the separatist fighters.

In reaction to the outcry of the Northwest population about the very bad state of the lone highway that links the Northwest Region to the Francophone part of the country, the Biya regime always uses the attack that was carried out against the French road construction company, SOGEA SATOM, to justify why the Babadjou – Bamenda Highway is in such a terrible situation today.

Worth noting that the project to rehabilitate the Bafoussam – Bamenda Highway, was launched way back in 2012: four years before the Anglophone Crisis sparked off in 2016, and five years before the crisis escalated in late 2017 to an armed conflict.

Worth noting that Babadjou is the home of the current Minister of Public Works, Emmanuel Nganou Djoumessi. Before occupying that ministerial portfolio, Nganou Djoumessi held another powerful post in Government, as Minister of Economy, Planning and Regional Development.

However, the fact is that, if the Biya Government had not – along the way – abandoned the Babadjou – Bamenda stretch of road, under the pretext of lack of funds, the entire Bafoussam – Bamenda Highway would have been effectively rehabilitated long before the Anglophone Crisis sparked off in late 2016.