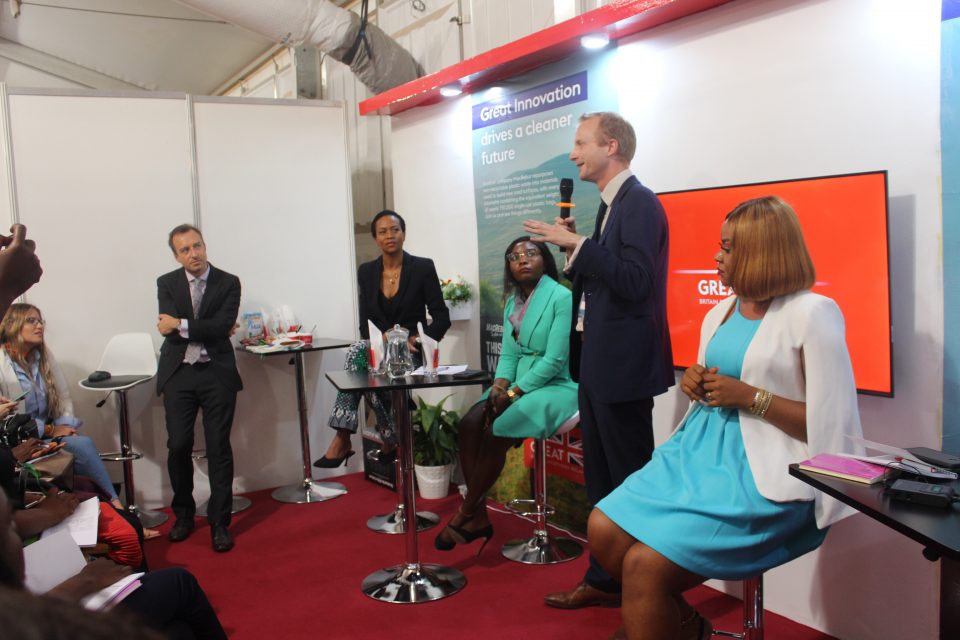 Cross-section of participants at Round Table Conversation

Cameroonian women have been urged to be innovative and trust themselves while doing their respective businesses.

The call was made on February 22 during the Women in Business Round Table conversation in Yaounde at the UK Pavilion situated where the International Exhibition of Business, SMEs, and Partnerships, Promote 2022 is taking place.

During a round table conversation moderated by Nina Forgwe, established businesswomen and young women with start-ups shared experiences as well as learned from one another.

Speaking during the event, Marie-Paul Matouke, Head of Corporate Affairs Brand and Marketing at the Standard Chartered Bank Cameroon, said, for women to succeed, they need to be knowledgeable about viable projects.

“Women need to be knowledgeable, that is, you need to know the project you want funding to be viable. You need to have a solid and structured business proposal and above all learn and seek for help.”

To her, women should not only look for bigger pictures, but should be realistic as funding will only come when they have a clear-cut business plan or project. Even though Women faced a lot of challenges in starting their businesses, established businesswomen on the platform called on women to believe in themselves and bring in innovative ideas.

There was a general call for women to support one another, while inviting men into discussions to seek growth. Before engaging in any business, women were advised to always do their homework and research and also under the market trend.

While admitting that women need support – not only from women but also from men, community, and government – experts admitted that access to communication and information plays a crucial role in the empowerment of the girl and women.

According to the Vice President, Liliane Dashaco, “the young girl needs to sit up. You fight ahead of you; don’t relent to the easy way because nothing good comes easy. Give in your best even though it’s not easy. Trust you can do it because it is only you who can make or take the decision to succeed”.

The round table conversation was organised because the UK government has realised that there is a gap where young people do not have the resources to grow or improve their businesses.

According to officials from the British High Commission Cameroon, the round table conversation was an opportunity for those who have made it in the business field to share what worked, what didn’t work with the younger generation so that they can better understand how to engage in the processes they have put in place to improve their businesses.

According to figures from Inter-Progress Foundation, which organised the event on behalf of the Cameroonian government, the number of exhibitors has dropped below the 1,000 participants to which the event is accustomed recent years.

Due to Coronavirus, the ceremony only began this year after two years of suspension. The event, which was originally scheduled from April to May, kicked off on February 19 and will close on February 27. Promote was launched in 2002.