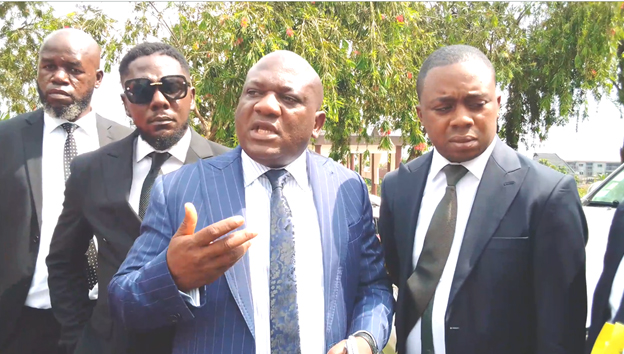 The Southwest Court of Appeal has ordered that detained nursing mother, Antoinette Kongnso Kohla, be freed on bail in a “landmark ruling” delivered on Wednesday, December 15, in Buea.

Speaking to The Post after the court session, Barrister Emmanuel Nkea, Lead Counsel in the appeal, described the verdict as a “landmark ruling” with his counterpart, Barrister Ewule Lyonga, stating that the ruling revives trust in Cameroon’s justice system.

“We hope that this is a landmark ruling for us because it serves to ensure the rule of law and it gives hope to the people that they have to resort to the legal levels of the country to seek justice and not to run around in desperate forms like mob justice and all the rest,” said Barrister Nkea.

He added: “We have brought before the court sufficient evidence; sufficient material to justify the case for bail. And to justify that this was a specific and special case that a blind will see and the deaf will hear. We are happy that the court upheld our submission and was able to grant bail to the applicant… We believe that this kind of judgment, this kind of ruling, it encourages everybody to believe in the court system.”

The bail application was granted with conditions, including a FCFA 1 million bail fees and FCFA 29,000 which will cover up for stamps and other costs.

For bail to be granted, Antoinette Kongnso also produced two sureties who have land titles and have permanent residence in Buea.

Talking on this, Barrister Edward Lyonga Ewule said: “We are happy that we have found solace in the court, even though the bail conditions are very strong. The bail conditions we have: two sureties, FCFA 1 million, two sureties in like sum and they must be resident within the jurisdiction of this court and they must have landed property. But the great thing is that we have had bail.”

The learned justice also said her detention violated the rights of her one-month-old baby who was born in detention.

“Cameroon has signed a lot of conventions to protect women who are pregnant and even children. We looked at those conventions and the judges of the military tribunal just violated the law. We are happy that the court of appeal, the inquiry control chambers has gone on to correct that,” said Barrister Ewule Lyonga, who championed a habeas corpus suit earlier filed at the Buea High Court.

Kongnso was being detained following a six-month remand warrant issued against her by the Examining Magistrate of the Buea Military Tribunal for failing to report terrorism linked to separatist “General” No Pity, whom she dated five years ago.

Human rights lawyers, led by Barristers Nkea, Ewule Lyonga, and several others, seized the Southwest Court of Appeal demanding her release on bail and the withdrawal of the Military Court’s remand warrant.

Despite being released, Kongnso “will have to report before the examining magistrate again each time she is required to do so.” This will be in order “to answer to the allegations; to complete the investigations that are being conducted against her,” said Barrister Nkea.

He promised: “Each time she is going there we will be with her and we urge this very strong delegation of women that have appeared here to come to support her with us. It should not end at this level and we hope that they will do so.”

Among the few women who openly defended Kongnso, amid deafening silence from other women advocates in the Northwest and Southwest, was Sally Ndape.

Sally attended all court sessions of the case, since October when lawyers battled with a habeas corpus application for Kongnso’s release, but which was rejected twice at the Buea High Court.

She beamed with joy when The Post approached her after Kongnso’s release was pronounced in court on Wednesday.

“I am very happy today. It has been a great day and a big victory to all of us. In the beginning it was a tough one and it wasn’t easy when the file was rejected every day I was advocating online – be it on Facebook on Twitter, be it on Instagram, calling on all women to be as one voice,” she said.

“At midnight I was up on this same matter calling on all women, calling on the government, and even calling on some Ministers that they should look into this case and reconsider it… I’m really happy that today it came out with good result because today I prayed and I believed in what I was saying – that there will be victory,” she added.

“From the tears in the hospital; from the labour room when I was with Antoinette; all the days passed at the hospital with Barrister Lyonga here – our tears haven’t gone in vain.”

The Anglophone Question: What Went Wrong, What Has Not Been Righted