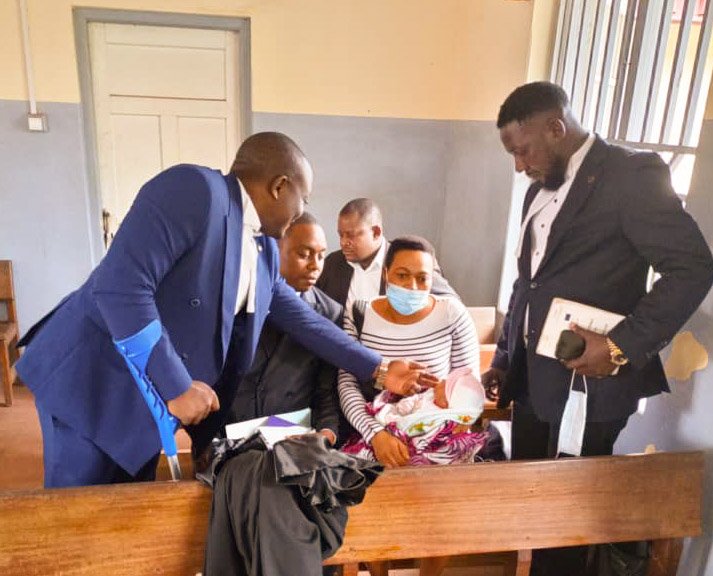 Antoinette and her baby cheered up by her defense team

Lawyers defending detained nursing mother, Antoinette Kongnso Gohla, who was arrested in October for alleged “failure to report terrorism”, have said they are “hopeful” the Buea Court of Appeal will grant her bail, as their appeal suit failed to be heard in court this Wednesday, December 1.

Speaking to The Post after leaving the court, Human Rights Lawyer, Barrister Edward Lyonga Ewule, who has been championing the case alongside about 10 other lawyers, said the Court of Appeal adjourned the case to Wednesday, December 8.

He mourned the fact that the detained Kongso was not brought to court, but said they are hoping on the Court of Appeal to grant her bail, after two failed attempts at the High Court to secure her release.

“The matter is on bail before the Inquiry Control Chamber of the Court of Appeal,” Barrister Ewule said.

He added: “We are positive and we know that the judges of the court of appeal will do justice, will grant bail, because all the facts that we have put before, it is something that requires them to grant bail. We are looking at one direction. The direction is that she should be granted bail.”

Defence Lawyers ‘Threatened From All Angles’

Talking on the accessibility of justice for the detained woman since her arrest on October 2 this year, Barrister Ewule said it has been “very difficult.”

The Buea High Court, on Nov. 16, dismissed a second habeas corpus suit Ewule filed, alongside Barrister Lingenju Vitalis, and about nine other lawyers to defend the nursing mother. The first habeas corpus suit was flushed from court earlier on grounds of “technicalities”.

The rights advocates filed the case a second time, arguing that Antoinette Kongnso’s arrest and detention were illegal, and so she needed to be released, at least on bail. But Justice Anne Afong, who ruled on the case, said Kongnso could only be released in April 2022 if preliminary investigations on charges levied against her show that she is innocent.

She is being accused of failing to report the “terrorist” activities of her ex-boyfriend, Separatist “General” No Pity, whom she dated some five years ago. Lawyers say Kongso’s purported offence is a misdemeanor and she has a right to bail.

Antoinette Kongnso was brought to court on November 16 alongside her baby, during which women’s rights advocate, Sally Ndape, observed that, “Her state today wasn’t a good one since the day she even put to birth… she is traumatised; she really needs psychosocial support that will provide trauma healing, because where she is, she is devastated.”

What has also been particularly striking about Kongnso’s case is how silent so-called rights groups advocating for rights of women and girls have been ever since the case came up.

Since Antoinette Kongnos’s case started on October 2, 2021, only Frida Ebai and Sally Ndape have dared to openly ask for her release. The two have been showing up at her trial, but the so-called leaders of women groups have neither been seen near the court premises, nor even condemned her arbitrary arrest in any statement.

In several instances, groups that have positioned themselves as advocates for women, girls and even youths have been seen protesting or issuing statements to condemn acts that infringe on rights of those discriminated upon, or punished unjustly.

In this light, many had expected such bodies to take up the case of Kongnso who was molested, tortured and detained without charges, by a non-warrant officer of the BIR. Kongnso was harassed, tortured and arrested from her Sandpit residence in Buea by so-called Moja Moja, traditional ruler and element of the BIR officer, alongside a group of young men also said to have been disguised elements of security forces.

Kongnso’s crime, according to her torturers, is that she once dated the now dreaded separatist commander, “No Pity”, five years ago. For this, though heavily pregnant, she was tortured and remanded in custody on a charge of “failure to report terrorism”. The charge which has been described by many as ridiculous, and it implies that she was supposed to know that her boyfriend of five years ago will one day be a separatist fighter, and as such, report to security officers.

When the case of Kongnso came up, many had expected that women advocacy groups like the Southwest, Northwest Women Task Force and other affiliate groups will take exception to her detention, especially as she was tortured when she was heavily pregnant, and not for a crime she committed, but for a crime of her ex-lover. This however did not appear strange to the women groups.

Many critics have been quick to insinuate that, from the composition of the leadership of the so-called women groups manned mostly by regime sympathisers and a few moderates, they have elected to only condemn abuse that are not committed by state personnel. Many have noted that the groups have always gone mute whenever an offence is committed by the state, and when it is by non-state actors, its goes very frontal and vocal. As such, it has seemingly been looked on as another wing of the ruling regime.

In one of its publications The Post observed and reported that women were recruited and ‘paid’ to protest. Disagreements on the sharing of such motivations, in the form of payment for protest activities, is said to be behind the dwindling fortunes of the groups that were hailed when they were created by those who seemed determined to shame and pressure leaders in the various divides in the Anglophone regions to sue for peace.

Unfortunately, the groups seem to have seen the evening just as the public expected much to be done by them in the domain of advocacy, especially for the rights of the down trodden.

Cholera Again! Plus Corona!  But Where Is The Main Weapon, Water, To Fight Them?