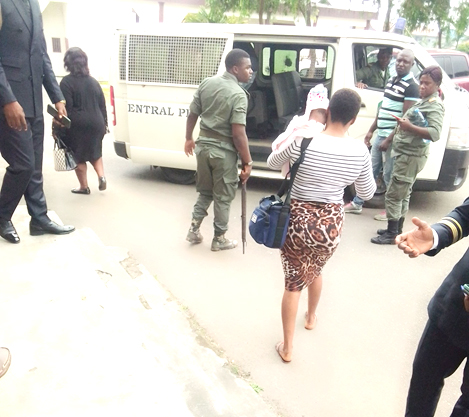 The case was heard at the Court of Appeal for the first time last Thursday, after two earlier adjournments on December 1 and 8.

Human rights lawyers seeking her release, on bail, say they remain hopeful for justice to be duly served, as “the facts are clear” that Kongnso remains innocent until when proven guilty.

Appealing in court last Thursday against previous verdicts, Barrister Nkea Emmanuel, Lead Counsel in the appeal suit, entreated the judges to be compassionate and humane in their ruling, considering she is being detained alongside a baby who has committed no offence.

Barrister Nkea and the legal team said that their appeal is grounded on the principle of presumption of innocence, which is guaranteed by the preamble of the Constitution of Cameroon and by Section 8 of the Criminal Procedure Code.

He argued that the charge against Kongnso – failure to report terrorism – is a misdemeanor offence and so she has a right to bail.

Thirty-year-old Antoinette Kongnso is being detained at the Buea Central Prison alongside her month-old baby on charges of failing to report the “terrorist” activities of her ex-boyfriend, Separatist “General” No Pity, whom she dated five years ago.

Barrister Nkea said they are demanding the Appeal Court to grant her bail and withdraw an imprisonment warrant earlier issued by the Examining Magistrate of the Buea Military Tribunal against Kongnso.

Kongnso’s lawyers are also appealing against an earlier ruling of the Buea High Court which deemed her arrest and detention legal until April 2022, when the Military Court’s remand warrant expires.

Buea-based human rights lawyer, Barrister Edward Lyonga Ewule, and several other lawyers had petitioned the High Court in October against the arbitrary and illegal arrest and detention of the nursing mother who was then eight months pregnant.

After the first habeas corpus application was thrown out of court based on “technicalities”, Ewule and his team refilled the case at the same court, but efforts were futile as it was dismissed a second time and jurisdiction transferred to the Military Court.

Antoinette Kongnso was taken from her home at Sandpit-Buea on October 2 by military officer and traditional ruler, John Ewome, also called Moja Moja, who abused and brutalised her in a video that circulated on the media.