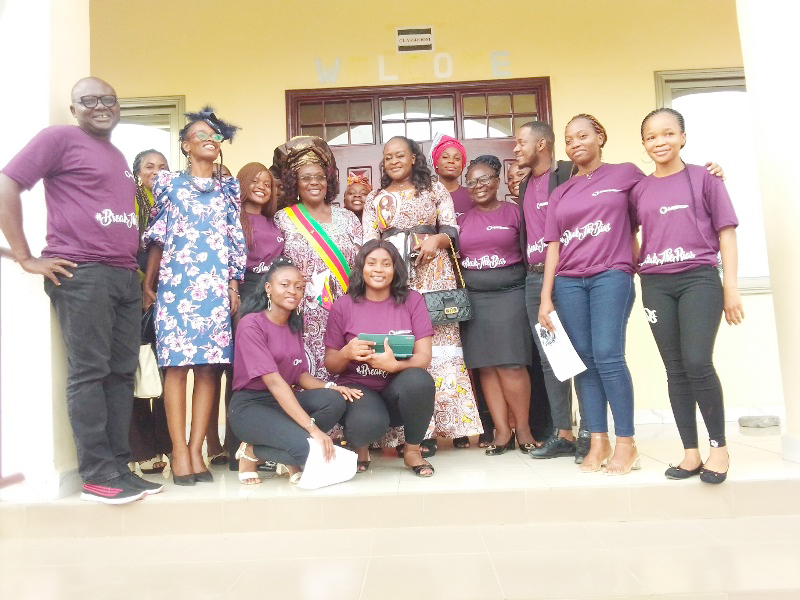 The staff, students and guests invited by the African Institute for Mathematical Sciences, AIMS, Cameroon, Limbe, joined the rest of the world on Tuesday, March 8, to celebrate the International Women’s Day.

The celebrations which were marked by talks from two prominent Guest Speakers, a panel discussion and other aspects, were tailored towards the drive to break the biases that still exist against the women.

During the opening, the AIMS Cameroon Centre President, Prof. D. Mama Foupouagnigni, said that, it was very important for them to celebrate Women’s Day because, “at AIMS, we value women.”

He explained that, their academic policy was that which the ratio of female students admitted at AIMS for each year was 30 percent. He disclosed that, AIMS was on the march to move the ratio up to 50 percent.

Taking the cue from the Centre President, Honore Bernard Youfegnuy, added that, at AIMS even the recruitment of staff is subject to the respect of that ratio. He said AIMS was already completing the ratio because for now, they were already at a ratio of 43 percent for women.

The disclosure of the above was to clearly demonstrate that at AIMS, efforts were already being made to break the bias against women.

Honore noted that, the policy was already yielding fruits because in all the graduating batches at AIMS, the female students have always been among the top best.

The celebration then moved on to a panel discussion that was made up of Prof. Dr Kristan Schneider, Berthine Nyunga, Yolande Ngueabou, Brenda Anague, Goktug Alkang and Ms Nessma Adil, as the moderator.

The key aspects of the celebrations were the presentations made by two Guest Speakers: First was the Honourable Member of Parliament from the Fako East Constituency, Hon. Etombi Gladys, who told the audience that, she has successfully being in Business for 42 years.

The second inspiring speaker was Brenda Elung, a lady from the Science background who graduated from the University of Buea and today is a Sub Director at SONARA.

Hon. Etombi made the audience, especially for the young girls to understand that, whatever dreams they have in life as to what they want to become in future, “let nobody detail you.”

She said to have succeeded for 42 years; it has taken her a lot of patience, perseverance, effort and a spirit of determination to be where she is today.

Mrs Elung, who have also tried her skills in the film industry, said, Science was very good because it makes “One creative and dynamic.”

She said, today, she does not only work in SONARA. But thanks to her passion from childhood about films, when she got into the film industry where she acted the role of a mother, she was surprised that, many hailed her for having been amazing. From this point, and armed with her science knowledge, she soon changed a lot of things within the Cameroon film industry, went on to study more and today, she is a producer and running a production company.

She ended by stating that, the young ones simply need to be determined to do what they have identified as their goal in life.

The celebrations were laced by; a song performance by Caroline Selby and Emmanuel Vincent, a poem by an AIMS student, Delchere Don-Tsa among other presentations.

It is worth noting that, AIMS Cameroon is one of the six centres of excellence where, some of the brightest students in Mathematics across Africa are selected and trained to be able to provide solutions to some of the problems facing the African continent.