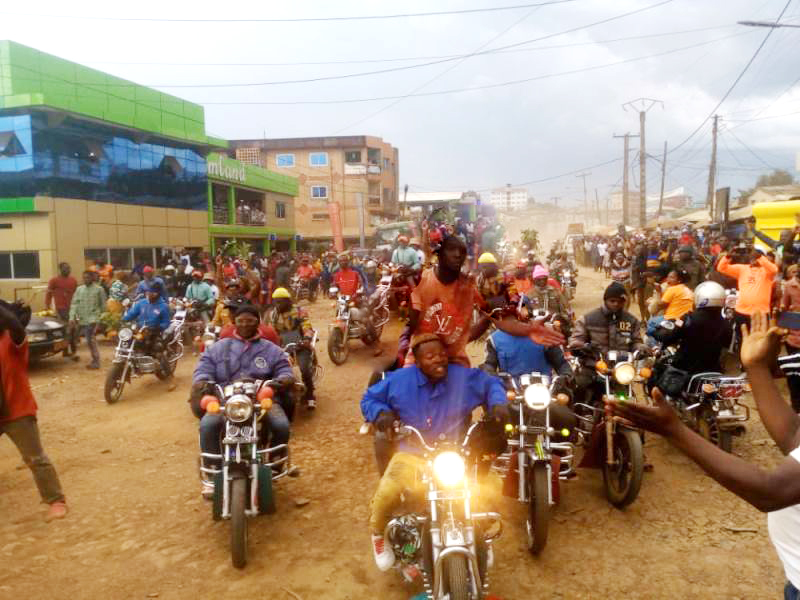 In just a couple of days, at least 12 lives have been lost in the Northwest Region, precisely in Bamenda and Santa.

The first was the killing of seven-year-old Brandy Tataw by a police officer in Bamenda, and the following morning was the killing of, at least, eight soldiers stationed at Matazem Checkpoint in Santa Subdivision by Separatist fighters.

Meantime, reports say two soldiers have been killed after an amoured car was attacked and destroyed in Mbengwi, making a total soldiers killed.

According to reports, a mixed military patrol was returning from the Matazem Checkpoint when they were reportedly shot dead during a gun exchange between them and the Separatist fighters. It is also reported that one civilian died from a stray bullet.

It was happening just a few hours after an event that led to the shooting and killing of a primary school pupil at the New Road, Mile Two, Nkwen, by a police constable at around 12.30 pm on Friday, November 12.

The driver, Godlove Ngum, who happened to be the Director-General of a Cooperative Credit Union in Bamenda did not know he had been called upon to stop and so, drove past the checkpoint.

One of the police constables from checkpoint, Alain Fahga, took a bike and chased the pickup to carry out his duty. On arriving at a junction, Saint Michael, the driver was called and notified of the police chasing him and he had to stop and even tried to turn his car around and go back.

Unfortunately, the constable constable, after shooting in the air, levelled his AK47 at the car and, in trying to shoot at the car, the little pupil, Brandy Tataw, aged seven and a pupil of GS Bayelle, who was returning from school, received the bullet on the left-hand side of the chest and fell into a gutter.

She was immediately rushed to the nearby PMI Hospital, where she finally gave up the ghost. The Post was told at the hospital that the bullet took her on the chest and not the head as people believed.

Falling in the gutter, she hit her head which created a hole there making people think she was shot in the head.

The Post also learned that, when the policeman and his colleagues came to the hospital and discovered the little girl had passed away, he was immediately smuggled away in the police vehicle before the angry population came out.

The population took the corpse of Little Brandy and marched with it to the Governor’s Office Up Station. Governor Adolph Lele L’Afrique expressed his condolence to the family and apologised for the “sad act”, promising that an investigation will be opened to fish out the perpetrator.

He added that, “President Paul Biya has sent his condolences to the family and has asked me to make sure this little girl is given a befitting burial”.

The Regional Delegate for National Security in the Northwest pleaded with the population to calm down as he revealed that the police constable had been apprehended and was behind bars, while investigations had been opened.

“If it is found out that this police shot at this pupil, then, he will be punished accordingly,” he said.

The population, angry that the constable escaped “mob justice”, requested for him to be handed over to them, to no avail. Angrily, they took the corpse on bikes brandishing FCFA 500 in their hands and marched through the whole city, causing a commotion, burning tires and blocking roads.

Stores at the Nkwen Market closed down immediately; activities around stopped as the death of the little girl was condemned by all.

The mother of Brandy, after being informed, could not stop crying and “thanking” the Government for killing their own colleagues’ child. The woman happens to be the wife of a police commissioner that had been posted to Oku and was killed in the course of the crisis.

Living in Kom, her house and property was burnt down and she escaped to Mamfe, still not stable there, she decided to come to Bamenda and start her life in the way she could. She was selling fruits along the road do to earn a living; pay rent, feed and send her child to school.

Facing the situation, Muslim Scholar, Abdul Karim, condemned the act and called for a demonstration which he led,  singing: “When will the Government stop killing us all?” as they marched along Mile Two Street.

“When two people are fighting and one of them starts killing children, he is a loser,” Karim said in a press interview. The incident happened just barely a month after a similar one in Buea in October, where a primary pupil was shot and killed by a gendarme officer.