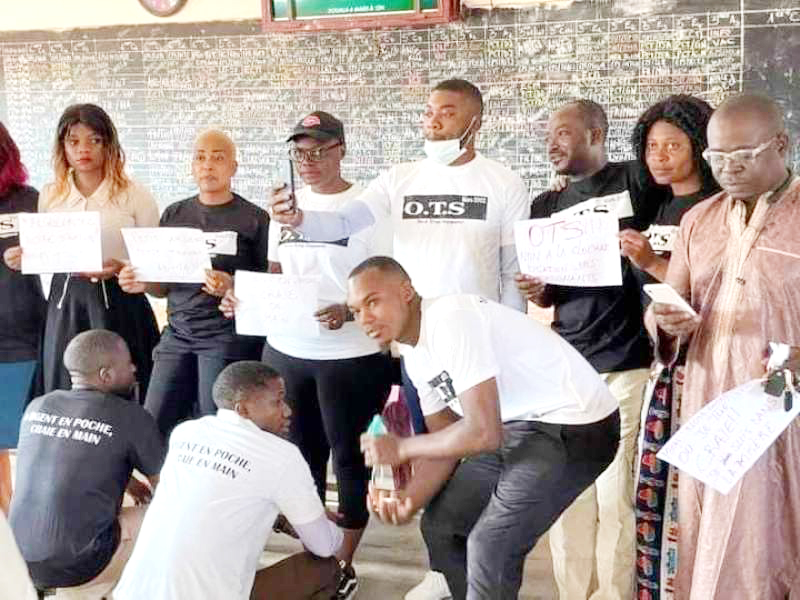 This is the third week running since teachers in Cameroon, mostly those of Secondary schools, under the banner of “On a Trop Supporté”, OTS, embarked on a strike demanding payment of their salaries and dues amounting to over FCFA 180 Billion.

The money the trainers are demanding from the Government has accumulated over time owing Government’s inability to fulfil its side of the bargain after numerous meetings held to regularise the situation.

Teachers are doing all these to bring Government’s attention to resolve the teachers’ grievances. The strike has not only hampered studies but made students who have paid fees and some preparing for exams lose hours without lessons.

On Monday, students of Government Bilingual High School Mabanda, in Douala, stormed the streets causing traffic congestion as they marched to the Senior Divisional Officer’s office to urge the Government to yield to the demands of their teachers.

The same scenario was observed in the South Region where students, in solidarity with their teachers who have downed their tools, marched to the SDO’s office to demand answers.

However, the Cameroon government was quick to respond with a measure it thought will make teachers back down. The President of the Republic, Paul Biya instructed that a sum of FCFA 2.7 billion be disbursed to the striking teachers.

This was followed by a meeting between the teacher’s trade union leaders and the Minister of Labour and Social Security, Gregoire Owona.

The Post learned that the meeting, which was held on Tuesday, February 8, didn’t go well as the teachers demanded that their full money be paid. However, the Minister was instead pleading for them to resume teaching.

When the sum couldn’t convince the teachers to end the strike, President Paul Biya through Secretary-General at the Presidency announced other measures among which the payment of all dues and reintergration of other teachers.

Observers have seen this as Government’s repeated strategy of always bribing or attempting to sway off leaders of synducates or groups striking, with an aim to persuade them call off the a strike action.

In Douala, the Principal of Government Bilingual High School Bonaberi-Douala instead instructed parents to teach their children as he asked the students not to come to school until March 14.

OTS is allegedly not having it well as the government is finding it difficult to come to terms with them for demanding a full sum of their money.

On Wednesday, February 9, other images surfaced on social media of teachers at Government Bilingual High School  Maroua protesting in front of the school wearing black. What they termed “Black Wednesday” was because their colleague, known as Hamidou, who taught for 10 years before he was recently integrated, died without money to treat him when he took ill.

In a meeting between the Government and teachers, The Post learned that the teachers were furious about the death of Hamidou, arguing that if his money had been paid on time, he could have afforded medication.

Other images circulated of Government Bilingual High School Mbanga where the Principal invited the forces of law and order to arrest teachers for striking.

Meanwhile, in the West Region, the Principal of another school summoned students to a disciplinary council for protesting.

Will the Government Yield to Teachers’ Demands?

The Government was faced with a similar situation in 2016 when the teachers of Anglophone extraction in Northwest and Southwest downed to their tools demanding educational reforms.

The Government created a committee headed by Prof. Paul Ghogomo which went to Bamenda, Northwest Region and held meetings with aggrieved teachers.

Despite the demands, the Government instead disbursed FCFA two billion for lay private schools, while also announcing the recruitment of contract teachers.

The meeting held twice without a concord. Later on, the Government turned around and arrested those at the forefront; that is, Dr Fontem Neba (now out of the country), Tassang Wilfred (serving a life sentence at the Yaounde Principal Prison) while others went on exile and the strike was technically called off.

With the current situation happening across the national territory, many people are asking if the Government can still make such an error. When it took off in Anglophone Cameroon, it later degenerated into a call for separation and now the education sector in these Regions is yet to bounce back.

Limbe YCPDM Thanks Biya For Choice Of City Mayor