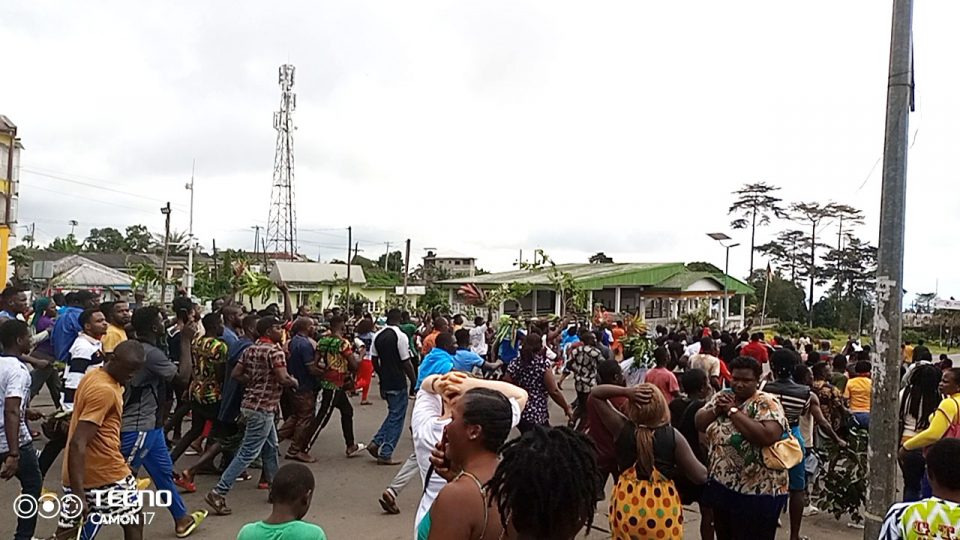 Life is yet to normalise; the dust of anguish is yet to settle in Southwest’s regional capital, Buea, after mass protests overwhelmed the city on Thursday, October 14, following the killing of a six-year-old pupil.

Carolaise Enondialle Tchuingia was on her way to school, with her mother and siblings when a gendarme officer shot her in the head, in a car.

The incident has sent shocking waves across Cameroon, and the world, with mounting calls for members of the Cameroon military to stop exploiting and terrorising fellow citizens, especially those living in the Northwest and Southwest regions.

Just like Buea Urban Member of Parliament, Hon Malomba Essembe, English-speaking Cameroonians are saying government should restrain the military and police officers; officers should stop brutalising and exploiting them.

“There is an unfortunate tendency by, I think, a few bad elements in the forces… which I understand because several times I’ve had to intervene at the brigade and other units where I’m told, in doing their work of trying to identify miscreants, there’s a tendency where phones are checked and you could be tagged a scammer or any other thing and taken to the brigade or to some other unit.

“I’m sure this kind of harassment is also what generated the frustration that made many to come out yesterday,” Malomba told journalists at a press conference, adding that, “Such harassment has to end. It is the only way we can give meaning to the senseless killing of our little sister, Carolaise.

“Our task as legislators is always to hold government to account and we will follow-up with these government officials to make sure that the military, the police, they stick to their work and the methods which are conventional,” Malomba said.

How Killing Of 6-year-old Happened

Carolaise Enondialle, the Class One pupil of CUIB Academy and Talent Catholic Primary School Buea, was killed near the Molyko Co-Cathedral about 7:50am on Thursday.

Gendarmerie officer, Achile Mvogo, who committed the act, was also lynched by a crowd and beaten to death few minutes later.

He had followed and shot, from behind, at the vehicle where Carolaise and her siblings were being ferried to school.

Reports say the vehicle was shot at because it did not comply with gendarme officers who controlled an “unauthorised” checkpoint they mounted on the road that morning.

A Government release says the officer had intended to fire warning shots to stop their Toyota car which was “evading control” but the bullets rather caught the pupil.

But many believed the vehicle was shot at, not because it evaded control per se, but because its driver did not bribe (settle) the officers, usually, with FCFA 500, a practice which is common among officers and car drivers in Buea.

“This incident was really aching because these people (the military) have exaggerated these harassments. I have been a victim. They once harassed me too and wanted FCFA 500 from me but I had not worked anything. I have seen this and it is too much,” said a driver who declined to be named said.

The incident, which happened around 7:50am on Thursday, according to a release from the Bishop of Buea, triggered immediate reactions from passers-by and people who heard the news.

Although the perpetrator, Achille Mvogo, was caught by the mob and beaten to death, the population went on rampage, marching and cursing the brutal and corrupt practices of the military and the police.

Thousands of Buea denizens paraded the streets on Thursday with the child’s corpse, her head ripped by bullets, the crowd fuming with anger and disgust for an act which they termed unacceptable.

Despite heavy military presence in town that morning, people defied the scare and marched with the corpse to the South West Governor’s Office.

Taxi drivers joined the protests, halting movement of vehicles around the city. Road blocks were mounted in Molyko, Buea’s business and academic hub; and by 9am, throughout the city, businesses and markets were also closed.

At the Buea independence square, women sat on the road crying and shaming military officers who passed by.

“We are tired! You shoot children; you shoot mothers, you shoot just anybody,” one of them lamented.

As the crowd marched through the streets, they chanted, “take 500 FCFA and give back our child.”

Unconfirmed reports say the late Carolaise Tchungia was shot over her mother’s refusal to “settle” the gendarmes, who were on roadside controls, with 500 FCFA.

Filled with shock and frustration, the population had refused to hand the pupil’s battered body over to family members or to authorities, according to Hon Malomba Essembe, who moved alongside protesters.

Southwest Governor Bernard Okalia Bilai had already been told of the chaos that engulfed the peaceful city, which is now one of the safest towns for thousands of IDPs driven by conflict from other parts of the two English-speaking regions of Cameroon.

When the crowd stormed his office that Thursday afternoon, Governor Okalia Bilai was visibly terrified, not just by seeing the battered body of a young child, but also by the angry crowd that had invaded his premises – it was the biggest demonstration Buea has witnessed in years.

The governor came out of his office in tears, describing it as “a shock”. “I am fighting that children should go to school. How is it that a child, on her way to school, is killed? So it is a shock. Be rest assured that I, governor – you know me; you know that I’m not a cunning man. Those who did it, no matter their grade, they will pay; they will pay,” he told protesters.

“Let us be in peace no matter how painful the situation is. It is an atrocity but let us not give room to people who will like to add to this atrocity,” he added.

The Governor said his administration will do everything possible to ensure such an incident does not recur. He said an investigation has been opened to determine those who share blame in Thursday’s incident.

Cameroon’s Ministry of Defence, MINDEF, issued a release on Thursday evening blaming the unfortunate incident on the driver who attempted to “evade control”.

In the communiqué which was deemed “inappropriate” and “insulting” by some observers, MINDEF’s communication officer, Col. Cyrille Atonfack, said the gendarme officer “fired warning shots” intending to “immobilise” the vehicle when the bullet caught the little girl.

Some Buea denizens say the communiqué was inaccurate, and “disrespectful”.

“If an officer cannot immobilise a car appropriately, then his (and that of many others) professionalism is up for questioning. This is how many keep losing their lives in the hands of such incompetence,” said Shaphan Chia.

Part of the MINDEF release reads: “After the usual identification procedures, an inexplicable verbal brawl ensued between the two gendarmes and the driver, who was firmly opposed to the search of his (It was a woman driving) vehicle to the point of initiating a new escape manoevre.”

“In an inappropriate reaction, unsuited to the circumstances and clearly disproportionate to the irrelevant behaviour of the driver, one of the gendarmes will, in defiance of the sacrosanct principle of precaution, fire warning shots in order to immobilise the vehicle,” the release continued.

The distressful and chaotic Thursday ended with the burial of the six-year-old victim at the St Anthony Catholic Church cemetery at Buea Town.

Thousands of people attended the ceremony. Mourners trooped into the burial ground. There was wailing, sadness and desperation.

“Graciously the Bishop immediately instructed that the priest in charge should be called and that space should be prepared for the child to be buried,” said Hon. Malomba Essembe, who did burial arrangements alongside DO Abba Abdurahman.

“The education secretary of the diocese, Father Michael, and two other fathers were there to perform rites for burial. The Director of the hospital (Buea regional hospital) Dr Mokake was there to examine the body. Fortunately, he had come with a body bag of her size in which the body was put and then buried and the population then dispersed,” Malomba added.

At about 8pm that Thursday evening, the Governor met with the bereaved family to whom he presented President Biya’s condolence message.

“Meanwhile we stayed back at the Church compound; the family was there. We spoke with them and when the Governor was informed that we were there with the family, he left his office with his retinue and they joined us there – it’s a small hall at the St Anthony Catholic Church in Buea Town,” Hon. Malomba recounted.