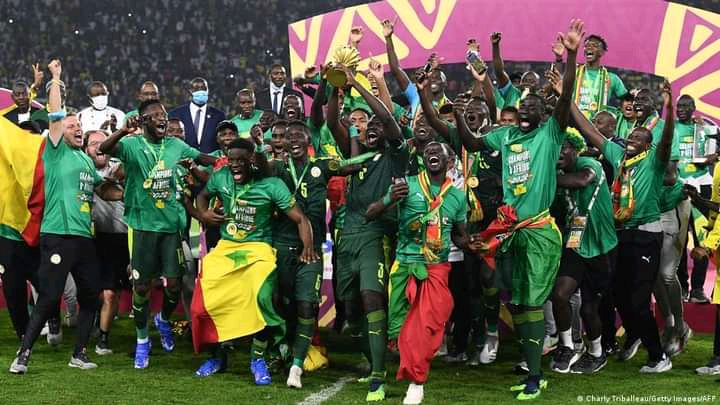 The 33rd edition of Africa’s most prestigious football competition, the African Cup of Nations, AFCON TotalEnergies 2021, that kicked off in Cameroon on Sunday, January 9, 2022, ended yesterday, Sunday, February 6, with the Teranga Lions of Senegal winning the prestigious trophy for the first time ever, by beating seven time champions, the Pharaohs of Egypt by 4 – 2 in penalty shootouts.

The Teranga Lions of Senegal were in the finals of AFCON for the second consecutive time. The Senegalese reached the final of the 32nd edition of AFCON which took place in Egypt in 2019, but were beaten at that final by another North African country, Algeria.

The closing ceremony was also graced by the presence of CAF’s President and Secretary-General, Dr Patrice Motsepe and Veron Mosengo – Omba, respectively. Gianni Infantino, the President of the world football governing body, FIFA, was one of the guests of honour at the occasion.

Meanwhile, after being booted out at the semi-final stage, the Indomitable Lions of Cameroon were left to compete for the 3rd position against the Stallions of Burkina Faso that, on their part, were kicked out by the Teranga Lions of Senegal in the other semi-final game. This was not the first time that the Indomitable Lions of Cameroon and the Stallions of Burkina Faso met in AFCON 2021 – the two teams clashed in the opening match of the competition on January 9. Cameroon then edged Burkina Faso by 2-1.

The match for the third place saw a lot of drama.  Cameroon, that was being embarrassingly led by 3 – 0 by Burkina Faso, scored three quick goals in the second half to bring the match to a draw at the end of 90 minutes. Since, according to the rules and regulations of the AFCON competition, there is no prolongation in a match for the 3rd position, Cameroon and Burkina Faso went straight to penalty shootouts, in which Cameroon won.

The Indomitable Lions of Cameroon have not lost a match at the Ahmadou Ahidjo Stadium since 1988.

Have The Stallions Been Cursed?

What happened at the Ahmadou Ahidjo Stadium on Saturday, January 5, was not the first time that the Stallions of Burkina Faso found themselves leading by a wide margin in a match for the 3rd position in an AFCON competition, only for the opponent to score quick goals and draw within a short time. A similar situation happened in 1998 when Burkina Faso hosted AFCON, and crashed at the semi-final. The country then had to sort it out with Congo in the match for the 3rd position.

After what happened again last Saturday, January 5 at the Ahmadou Ahidjo Stadium in Yaounde, the Burkina Faso people should certainly be asking each other whether their national football team has been cursed by their gods

Many observers were definitely surprised to see the state of ecstasy that engulfed Vincent Aboubakar (Captain), Toko Ekambi, Fai Collins, Nicolas Moumi Ngamaleu, Frank Zanbo Anguissa, Samuel Oum Feet, Nouhou Tollo, Nicolas Ngadeu, Goalkeeper Andre Onana and their other colleagues of the Cameroon national football team, as well as the technical staff, including Head Coach, Antonio Conceiçiao, after the team won the 3rd position, and claimed the bronze medal of AFCON 2021, at home. FECAFOOT President, Samuel Eto’o Fils, and members of Government who were in the stadium, all joined the celebration for the 3rd position that Cameroon won. Some say the bronze medal was a consolation prize for Cameroon.

Many had hoped that Cameroon will win the trophy, after they hosted the competition in 1972 and lost. The target was not met as the 1972 situation played out again.

The Government and FECAFOOT are even being criticised for the way they tried to use money as motivation for the Lions to win matches. Worth noting that, before going in for the semi-final match against Egypt,  each player of the Cameroon national football team had officially grabbed a total of FCFA 100 million as match bonuses, for the country’s qualification for the knockout phase, and their victory at the 1/4 final.

The Cameroon national football team of Tokoto Jean Pierre, Emmanuel Mve, Jean Paul Akono and others that played the 1972 AFCON that Cameroon lost at the semi-final, comparatively performed better in the match for the 3rd position, than Captain Vincent Aboubakar and his mates who failed to correct their senior’s 1972 error. Tokoto Jean Pierre, the goal poacher for the Cameroon national team of 1972, and his colleagues walloped Congo Kinshasa or Zaire by 5 – 2  in the 3rd place match, in 90 minutes. Aboubakar and team only struggled and did it at penalty shootouts.

When the 2-year contract of the Head Coach of the Indomitable Lions, Antonio Conceiçiao, was renewed in September 2021, he was given two major missions to accomplish.

The first one was that Cameroon should reach the final of AFCON 2021. Many were surprised that the mission instead ended at reaching the finals, instead of winning. However, the demand that Cameroon should at least reach the final of AFCON was logical. In as much as the real hope or target of the Government and FECAFOOT was that Cameroon should win AFCON 2021, the target set for Coach Conceiçiao was that in a situation where Cameroon failed to win the trophy, the country would have, at least, reached the final. This would have been a consolation that though the Indomitable Lions failed to win the cup, there was at least an improvement by Cameroon as compared with the performance of the national team at the first AFCON that the country hosted in 1972.

Conceiçiao’s second mission was that Cameroon should qualify for the next World Cup to hold in Qatar later this year. As for that, Cameroon is scheduled to sort it out with Algeria late next month, for one of the tickets to qualify for the World Cup.

Many Cameroonians are beginning to question the Coach’s skills after the team’s performance at the AFCON.  However, there are some other people that are arguing that it would be unwise to sack Conceiçiao now, with the crucial World Cup qualifying matches against Algeria around the corner.

The Indomitable Lions of Cameroon, that the Cameroonian people had hoped will win AFCON 2021, turned out to be a big disappointment to the people, as the team could not even reach the final. The Lions were knocked out at the semi-final by the Pharaohs of Egypt by penalty shootouts, at the Olembe Stadium on Thursday, February 3.

The Indomitable Lions thus woefully failed in the mission that was assigned to them by the country in AFCON 2021, which was to win the trophy and thus delete the painful memory in the minds of the Cameroonian people back in 1972,  when the country hosted AFCON for the first time.

The 33rd edition of AFCON was the second of the continental football festivals to be hosted by the country and surviving football legends like Mbappe Leppe, Tokoto Jean Pierre, Roger Milla, Thomas Nkono, Samuel Eto’o Fils, Ndip Akem Victor, Geremie Njitap, among others.

This means that the second AFCON that Cameroon has just hosted, came after as many as 50 years or half a century, after the first ever AFCON that the country hosted. Unfortunately, the country again failed to win the trophy at home.

Many Cameroonians were confident that the Indomitable Lions will win the trophy. That hope crumbled on Thursday, February 3, 2022, when Egypt trashed Cameroon at the semi-final game of the competition.

Cameroon has won the African Cup of Nations five times, and occupies the second position after Egypt. This was an opportunity for Cameroon to grab its sixth AFCON trophy.

It is not only the Male AFCON that Cameroon has hosted and lost in recent years. In 2016, Cameroon hosted the Female AFCON, but was beaten at the final that was played at the Ahmadou Ahidjo Stadium in Yaounde by Nigeria. The country thus had to console itself with a Silver Medal.

In 2021, that is, last year, Cameroon hosted the African Nations Championship commonly known by the French acronym, CHAN, and also lost. Cameroon, which was beaten at the semi-final by Morocco, could not even win the match for the 3rd position.

Meantime, President Biya has definitely taken the pains most, to see Cameroon host AFCON, and at the end, he has to personally handover the trophy to another country. He painfully did it in 2016 when Cameroon hosted the Female AFCON. The President delegated the Prime Minister to represent him at the final of CHAN last year.

This time, President Biya painfully had to personally do it again at AFCON 2021 that Cameroon hosted, and that ended yesterday, January 6.