The Post Newspaper is a break-off from Cameroon Post, which was founded by Augustine Y. Ngalim in 1955, when Victoria (today known as Limbe) was a Fleet Street of newspapers in West Cameroon. Besides Cameroon Post, there was Cameroon Times, Cameroon Outlook, just to name these few.

Before the historic year of 1990, A.Y Ngalim gave the publishing franchise to Paddy Mbawa who became Publisher and he, A.Y Ngalim stayed on the masthead as Founder.

Around 1994, Paddy Mbawa had issues with Mafany Musonge as General Manager of Cameroon Development Corporation over and insurance scam on workers with Broking Services International insurance outfit. In an out of court and facing imprisonment, Paddy Mbawa passed the publishing right to Dr. Nfor N. Susungi, a banker based in Ivory Coast. Susungi’s cousin, Polycarp Tarla was named Publisher.

By June 1997, staff of had gone for three months without stipends. Resources for printing were not coming. The editorial staff; Francis Wache as Executive Editor-in-Chief, Charly Ndi Chia as Editor-in-Chief, Julius Afoni, Clovis Atatah and Bouddih Adams as Copy Editors, sat together and agreed that they should obtain a loan and run the paper, until funds start coming in again from Ivory Coast.

Wache obtained the loan and after printing three editions, an envoy was sent to Bamenda that was selling the highest number of copies to collect sales, to continue printing and waiting, but A.Y Ngalim who was controlling sales upcountry refused to hand over the proceeds.

At the same time, the management decided to relocate the editorial office in Douala and carted all the machines and other equipment to Douala. Moving to Douala to the staff was like betrayal because the paper might lose its Anglo-Saxon culture, virtue and values.

Disappointed and desperate, the staff decided that as the finest squad (as they referred to themselves) they will not disperse but stick together. After many suggestions, they settled on the title; The Post with headquarters and editorial office in Buea.

They borrowed computers and furniture and went to work and on July 11, 1997, The Post hit the stands with a bang and splash … and endless ripples that have continued to date. Sometimes the ripples snowball into a huge wave that rolls, bashes and breaks hot news, carefully researched findings or investigative reports that have put the paper in the lead of all English language newspapers in Cameroon.

The Post, can be called (and rightly so) a child of circumstances. Unlike individuals or a group of persons would plan to start a paper, no one had planned to start the news organ. It can also be said to have hit the road running – as a by-weekly. Yet, it can be termed a child born with teeth because it took on some of the burning issues, political, economic and social frontally, without fear or favour.

Its first editorial office was located on CEREC Building in Molyko, Buea University Street, before it was transferred to Souvenir Car Park at Great Soppo, later down to former GCE Board Junction, then to Sandpit-Buea and now to its own building in Bonduma-Buea. It has bureaus in Yaounde covering  the Centre, South and East Regions; the Bamenda bureau covering the Northwest and West Regions; Douala Bureau covering the Littoral and then the Kumba bureau covering Meme, Manyu, Ndian, Kupe Muanenguba and Lebialem Divisions and the Limbe bureau covering Idenau, Limbe Tiko Muyuka Towns.

The editorial policy, in a nutshell, protect the Anglo-Saxon culture, virtues and values, a newspaper and the service of the people, a market place of ideas and a promoter of good democratic practices.

Of the founding editors, Julius Afoni is no more, Clovis Atatah left for further studies in Europe, Charly Ndi Chia created his own paper – The Rambler. Hence, Francis Wache (now of late) and Bouddih Adams are still on board, together with Yerima Kini Nsom as Yaounde Bureau Chief, Joe Dinga Pefok as Douala Bureau Chief and Chris Mbunwe as Bamenda Bureau Chief. 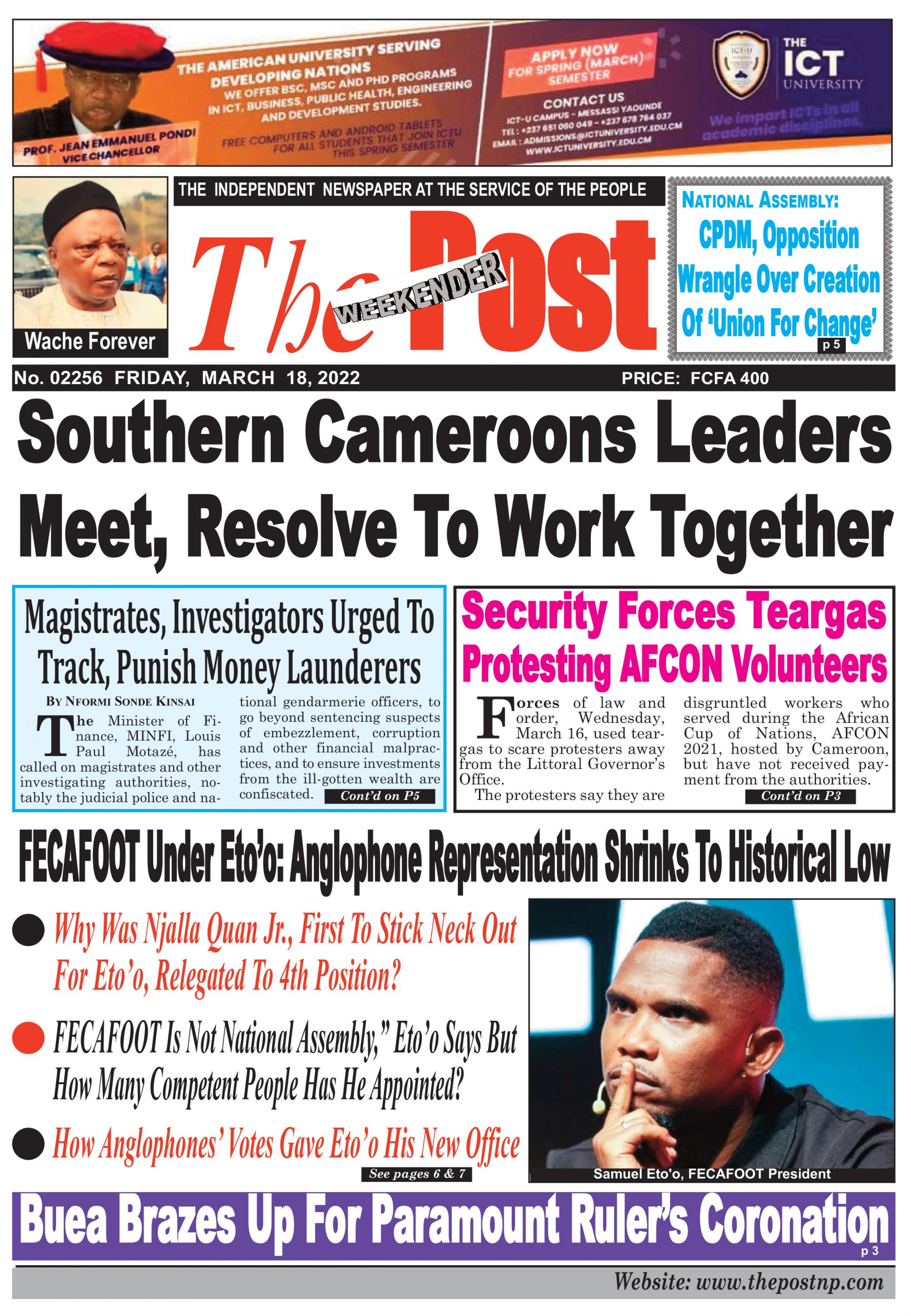 We Are A Market Place Of Ideas!

Buy a digital copy right from home with MOMO or Credit card any time and anywhere!