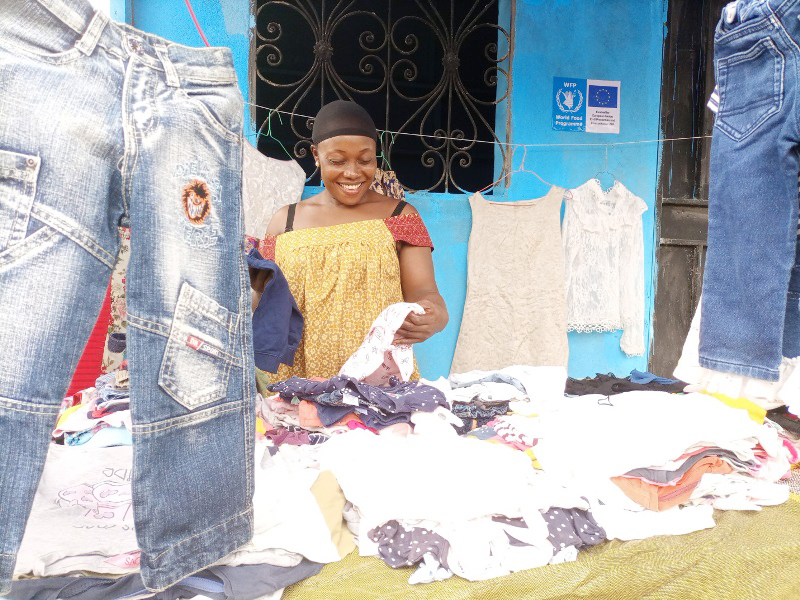 WFP aid beneficiary, Joan Idang Ejegewah, in her own shop, smiles at how her life is getting back together

Joan Idang Ejegewah, a victim of the Anglophone Crisis, never thought of a good life again until when the United Nations World Food Programme, WFP, came to her rescue.

Standing before her clothing shop at Mile 16, Bolifamba, Buea, all she could be heard saying was, “I want to thank the WFP very much. It is like a lifesaver to me”. As Joan Idang recounted her past life, she showcased the products which she sells as a result of the money she received from WFP which has helped her to start a business that has made her pay her rents, have what to eat and send her children to school.

Joan Idang hails from Kombone in Kumba, Meme Division in Cameroon’s Southwest region. She was a flourishing businesswoman before late 2016, when the Anglophone Crisis erupted and subsequently escalated, making her lost nearly everything she has worked for.

When the crisis escalated in 2017, life became unbearable for her family. At this moment, all they could do was run. Now, she is an internally displaced person in Buea. Though, life was challenging when they first reached Buea as compared to now.

“It feels good to be a beneficiary because we have passed through situations that make us feel bad and worried,” Joan Idang said. “For this programme to come up, is like being part of solving some of our problems.”

She is not the only one that is feeling relieved from the crisis owing to the UN WFP humanitarian gesture.

Stephen Aworo Afu is also an IDP from Njikwa in Cameroon’s Northwest, one of the two English-speaking regions where separatist want to create a breakaway nation.

Aworo fled to Buea with his two kids and a wife, abandoning everything he owned behind. In Buea, thanks to the WFP cash base transfer programme, he has been able to start a small bakery that produces “galettes” for the Mile 16 community.

“If I am succeeding today, it is by the Grace of God and by the help of the World Food Programme,” he said, adding that “truly, they have really been a blessing to me”.

Stephen Aworo and Joan Idang are among the 302,209 vulnerable persons who have benefited from the WFP support in the Northwest and Southwest Regions of Cameroon.

The programme has helped 27,880 people through its Cash Base Transfer, CBT, while 77,989 benefited through General Food Distribution, GFD, in the Southwest Region.

The programme, which was mainly funded by the European Union, one of the WFP’s partners, summing up to Euros 3.6 million, started in March 2021 and is ending this February, 2022 based on WFP Cameroon Strategic Plan 1. However, another phase of the operation will be starting this year.

The CBT programme in the whole of Southwest was applied only in Fako and Meme Divisions because of the security assessment carried out by the WFP. Each beneficiary was receiving a monthly sum of FCFA 5,000 ($8.5).

According to Kudzayi Mazumba, UN WFP Head of Field Office Buea, the Anglophone Crisis has affected several households by restricting some peoples’ access to their farmlands, businesses and livelihood opportunities.

“Therefore WFP assistance is meeting some of their needs by providing either food or assistance in cash,” he said. He stated that they carried out a lot of assessment before determining who is vulnerable and needs WFP assistance.

He added that the insecurity in the field limited their capacity to do more however, they still pushed through with the help of cooperating partners physically on the ground.

“Despite the challenges, we had some mitigation measures in place,” Mazumba said. “We were quite successful in assisting the people in need.”

WHO Donates Over FCFA 500M To Combat COVID-19, Guinea Worm