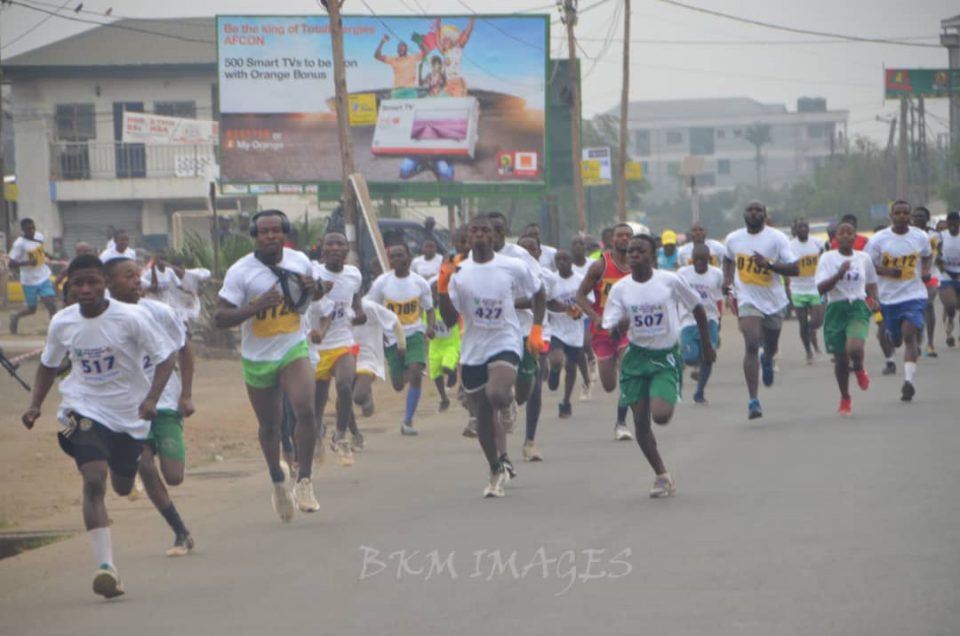 The Buea Test Race ahead of the 27th edition of the Mount Cameroon Race of Hope saw Samuel Lyonga Esombe and Pamela Ndifon emerging champions in the men and women’s categories, respectively.

The race that took place on Saturday, January 14, in Buea had some 250 athletes in participation. There were also a good number of junior runners in this edition, unlike in the past.

The turnout at the level of the participants surpassed that of last year where just 150 athletes showed up. The athletes ran from the Molyko Omnisports Stadium entrance to the New Hut and back.

In the men’s category, the son of the Queen of the Mountain, Samuel Lyonga Esombe, did the race for 2hrs 22mins 26 secs. In the second place, Adama Ilyasu finished the course using 2hrs 24mins 1sec. While, on the 3rd spot, Ponder Bah completed the list of the first three on the podium in 2hrs 24mins 50secs.

Compared to the last edition of the Test Race in which Hamadou Ibrahim and Carine Tata won, the pair used less time to finish the course, unlike their successors. That is, 2hrs 15mins 17secs and 2hrs 58mins 40secs in the men’s and women’s categories, respectively, as winners of the race.

Speaking after the race, Essombe said he remains optimistic and will continue to work hard ahead of the main race.

“The Test Race was well organised. I did my best in the race but I won’t be complacent, for, in the main race, champions will come from other parts of the world. I will continue praying to God for more energy to train,” Essombe said.

The female champion, Pamela Ndifon, from the Northwest Region, who now trains in Nkongsamba, said it was a tough race but she thanked God for the victory. Ndifon Pamela won the 2021 edition of the main race in the junior female’s category and promised to work harder to defend her title this year.

Speaking after the Test Race, the President of Cameroon Athletics Federation, Emmanuel Motomby Mbome, applauded the organisation of the race while also promising the to unveil surprises in the main race.

Hear him: “Buea has always been the place where the Test Race always has a different dimension. I want to congratulate the Regional President, Eteki Njoh and his team, for a job well done. The effervescence of the Test Race is leading us to a wonderful 27th edition of the Mount Cameroon Race Of Hope”.

The main race has been scheduled for Saturday, February 19, 2022.