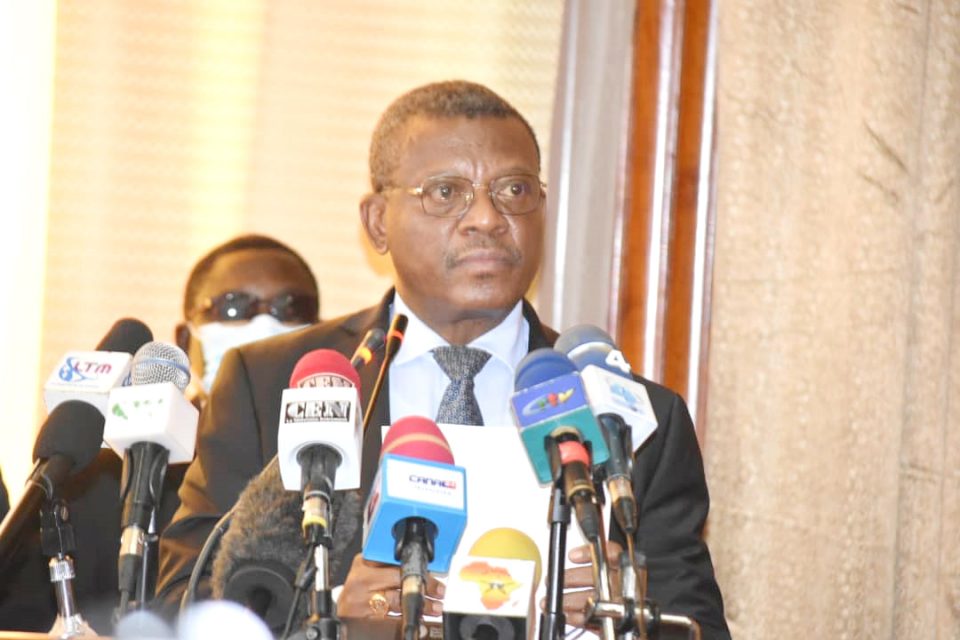 The Government of Cameroon has unveiled the draft state budget for the 2022 financial year, witnessing a 5 percent increase compared to the 2021 budget. The draft budget, presented before parliament by PM Chief Dr Dion Ngute, stands at FCFA 5,752.4 billion as against FCFA 5, 480.4 billion in 2021.

The information was made public on November 26 by the PM, in a plenary sitting at the National Assembly devoted to the presentation of the economic, financial, social and cultural programme of government for the year 2022. The session was chaired by Hon. Cavaye Yenguie Djibril, Speaker of the National Assembly.

Dion Ngute noted that the draft budget has witnessed an increase of FCFA 272 billion in absolute terms, and five percent in relative terms as compared to that of 2021.

The PM pointed that 5,909, 7400 million has been allocated as general budget; FCFA 152 billion 700 milion to special allocation accounts; while internal revenue and grants are projected at FCFA 429 billion 200 million with an increase of FCFA billion 300million compared to the forecast of the previous financial law of 2021.

As concerns priority areas, Chief Dr. Dion Ngute indicated that, in the tourism sector, among other things, government will continue with works to rehabilitate and extend hotel La Benoue in Garoua. He said Ayaba Hotel in Bamenda will also be rehabilitated.

In the Basic Education sector, government will rehabilitate eight nursery blocks, construct 17 latrine blocks as well as 2,766 classrooms. Some 96 Primary schools will be rehabilitated while 26,000 Primary School Teachers are to be trained, amongst other things.

In the secondary education sector, rehabilitation of schools destroyed in the Northwest and Southwest regions and equipping of some 26 schools with solar kits is also envisaged. The fight against drugs in schools will also continue and FCFA 2 billion has been allocated as subsidies to private schools.

The year 2022, according to the PM, will also witness the effective start kick-off of Universal Health Coverage, with pregnant women and children below five years prioritised. Besides the construction and rehabilitation of the Babadjou-Bamenda road, the second access road to the city of Bamenda will be constructed.

The government also plans to launch rehabilitation works at the National Oil Refinery, SONARA. The effective holding of the General Population and Housing Census is expected to take place in 2022 alongside the General Agriculture and Livestock Census.

Apart from the hosting of the Total Energies 2022 Africa Cup of Nations, continuous implementation of efforts to resolve security issues, strengthening of the decentralisation process and sanctioning of dishonest managers of Public Assets have all been earmarked for 2022 state priorities.

The PM said the implementation of the planned activities shall be in line with the new economic-financial programme concluded with the IMF. Internal-non oil revenue generating activities will be prioritised. Mastering and improving the efficiency of public spending to reduce the budget deficit from 3.2 percent of Gross Domestic Product, GDP in 2021 to 2 percent in 2022 is envisioned.

After the PM’s presentation of the draft budget, Ministers will take turns before the Finance and Budget Committee of the National Assembly to defend their respective budget allocations. The exercise will end with the adoption of the 2022 budget.

Will Cameroonians Be Patient, Allow Song & Team To Deliver?