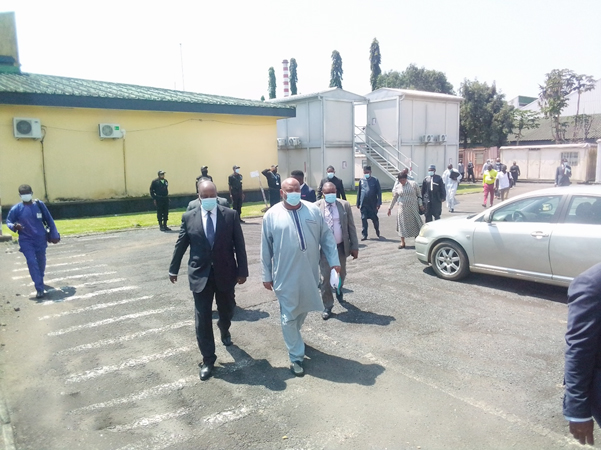 Members of the Trade and Production Commission at the National Assembly have pledged to push the Government to quickly find ways to rehabilitate the damaged section of the National Oil Refining Company, SONARA.

The members took this commitment on Wednesday, November 17, following a fact-finding visit to the Refinery by 13 members of this Commission.

It has been two years and six months today since Cameroon’s lone petroleum refinery stopped production following an explosion that seriously damaged four of its production units on May 30, 2019.

Since then, coupled with the Coronavirus pandemic that has exacerbated the economic situation of the country, the Government has been unable to rehabilitate the damaged refinery.

Pricked by the dire situation in which the Country’s lone refinery still finds itself, the Members of Parliament were forced to make a trip to SONARA and find out what can be done to effectively bring SONARA back to its production life.

The delegation, led by Hon. Serge Benae on behalf of the Commission President, Hon Guillaume Mbakam was received at SONARA by the General Manager, Jean Paul Simo Njonou.

The GM and all his directors then proceeded to have a closed-door meeting with the MPs. This was followed by a tour around the production units of the refinery where the GM, assisted by his immediate collaborators and some technical staff, gave the MPs a detailed explanation of all that they wanted to know.

“We are leaving SONARA very satisfied with the first-hand knowledge we have had about the state of the refinery,” Hon Benae and Hon. Stanley Mokondo Findi told the press after the visit.

They said that the first-hand information they have gathered will enable them to better lobby the Government for a quick solution to ensure that SONARA comes back to life.

The GM and his collaborators finally saw off the team of satisfied MPs at about 4:00 PM after their over five-hour stay at SONARA.

At Promote 2022: UK Expresses Commitment To Invest More In Cameroon